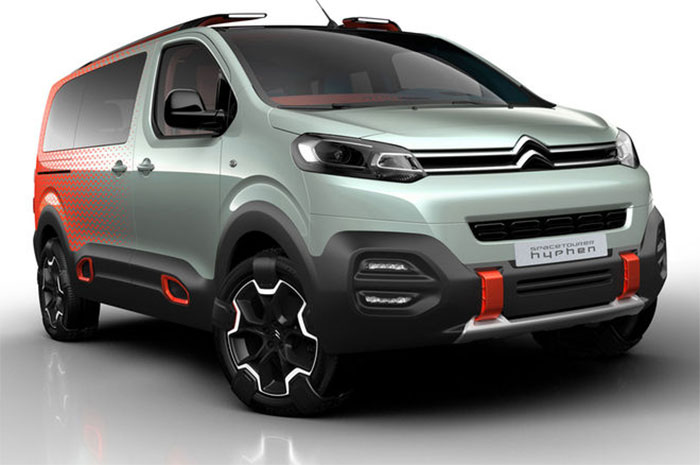 Citroen is showing off a very cool concept car that is sort of like a mix between a SUV and a van. The concept is called the SpaceTourer Hyphen and it as designed with the help of a French pop group called Hyphen Hyphen. The concept is covered in a matte Dark Moondust color with red-orange accents.

The concept rides higher than the production version of the car giving it a rugged look. The interior has seat coverings that match the exterior colors of the vehicle. A BlueHDi 150 S&S diesel engine with a six speed manual transmission will power the concept. It is also designed for off-roading capability with an increased ride height and special 4×4 transmission.

“Citroen has always known how to innovate, to be a pioneer and to spot talent. After meeting Hyphen Hyphen, the idea for a partnership came about naturally. This vibrant, offbeat group has a real graphic and musical signature. This may be a communication campaign, but one that comes straight from the heart! It’s also a way for us to pool our values of optimism, sharing and creativity,” said Arnaud Belloni, Director of Marketing and Communication at Citroen.