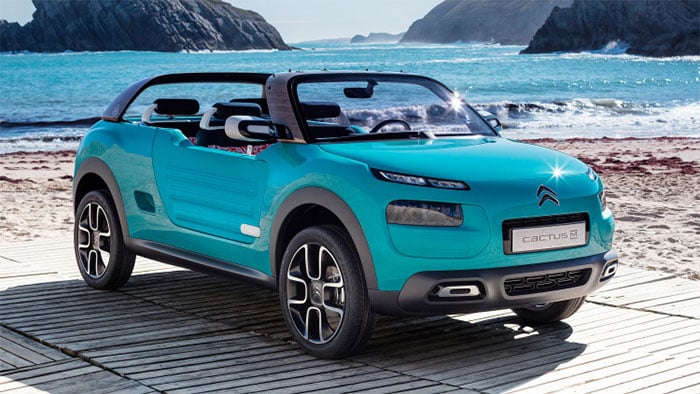 One of the many car brands that we don’t get here in the US is Citroen. Citroen has unveiled a very cool looking concept car called the Cactus M Concept. Considering that the concept car is clearly aimed at the beach set, it’s rather odd to call it the Cactus M with the cactus being a desert plant typically located far from the water.

The concept car is an open top unit with a rack on top that is built in for holding your surfboard. It looks like something that would turn up on a revamp of that old island series Fantasy Island with the Hawaiian style upholstery inside the car. It’s got a lot of little touches like cutouts on the side to help people climb into the rear seats from outside.

That Hawaiian print seat fabric is neoprene and it is waterproof. I guess the idea is that you can climb out of the ocean, right into the Cactus M for the cruise home or to get something to eat. A gas engine mated with an automatic transmission powers the concept car. The odds of this car going into production are very slim.