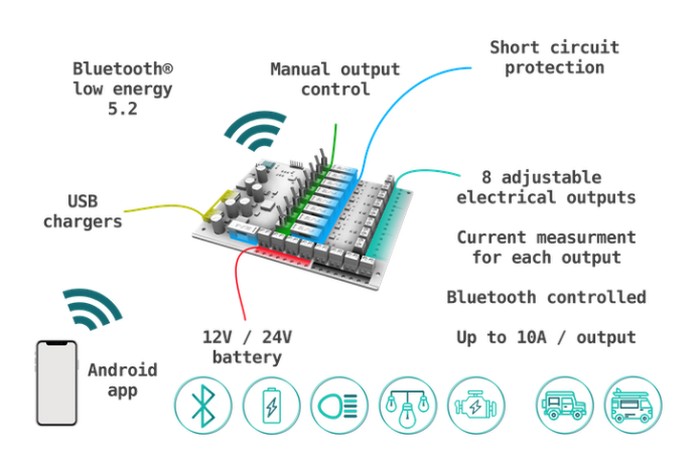 Those of you lucky enough to own a campervan may be interested in a new system called ADCOUT, that allows you to fit your campervan with a wireless electric system. One set up ADCOUT allows you to power, control and monitor the electrical devices in your campervan using the companion Android application. ADCOUT has been specifically designed to be quick and easy to install and is ready to operate without any configuration needed straight out-of-the-box say its creators. ADCOUT is a wireless 12/24V switch that includes advanced features enhancing your campervan thanks to the engineers and designers at Tribus Elementis based in France

Backer early bird pledges are now available for the recently launched project from roughly $80 or £59 (depending on current exchange rates).

“With a simple Android application, you can control up to eight devices, monitor the current consumed by each of them and check the battery voltage as well as control electronic devices in campervans and 4x4s. ADCOUT stands for Adjustable DC OUTputs. ADCOUT can be supplied with a voltage ranging from 10 to 30 V, so you can use either a 12V or 24V battery. Each of the eight outputs can be controlled and monitored individually. Using the app, you can ajust the output power and check current consumption.”

If the ADCOUT crowd funding campaign successfully raises its required pledge goal and the project progresses smoothly, worldwide shipping is expected to take place sometime around March 2022. To learn more about the ADCOUT campervan electrical system project play the promotional video below.

“The device includes two USB chargers. Each USB power supply is generated by a high efficiency 5V converter. Security is an integral part of the system. It will be used in a vehicle, then it is essential to avoid any risk of fire or even overheating. This is why there are nine fuses to avoid overcurrent: 8x 10A fuses : one for each output and 1x 3A fuse for bluetooth control and both USB chargers.”

For a complete list of all available project pledges, stretch goals, extra media and full specifications for the campervan electrical system, jump over to the official ADCOUT crowd funding campaign page by clicking the link below.