God bless the Second Amendment. If there were no right to bear guns, upstanding citizens like this mustachioed fella wouldn’t be able to come up with such weird armaments. Yes, people this is not a joke. The weapon holstered on his chest are two Glocks ready for carnage on the shooting range. 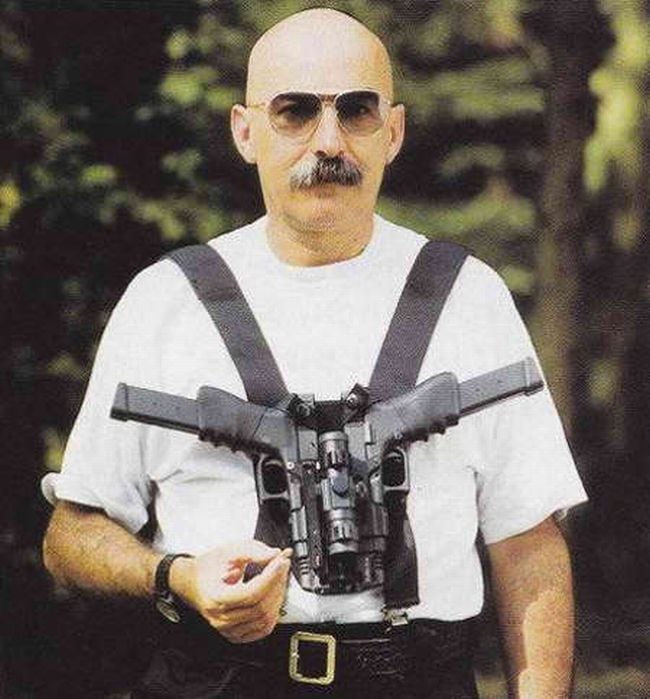 Allowing for a moment’s digression, the Glock is a wonderful firearm whose production marked a turning point in handgun technology. It’s accurate, rugged, easy to disassemble, has an astonishing rate of fire, and best—it doesn’t jam. Such are the eternal verities that make an iconic firearm. The bald Duke Nukem wannabe pictured up north (date of photo unknown) out Dukes the Duke himself with his weird mod of what amounts to a twin-barreled machine pistol.

Okay, so the configuration is a bit off since your wrists are bent while firing this juiced up baddie. The point is it’s silly and ridiculous. Fun to look at too. But hey, laugh as much as you want, Glocks shouldn’t be messed around with, especially when you’re at the receiving end of them 9mm bullets. On the picture you see two 30-round magazines on each piece. That’s 60 rounds total. A lot of lead, boys and girls. A lot of lead.

Yup, this is gonna end up on a first person shooter one of these days.