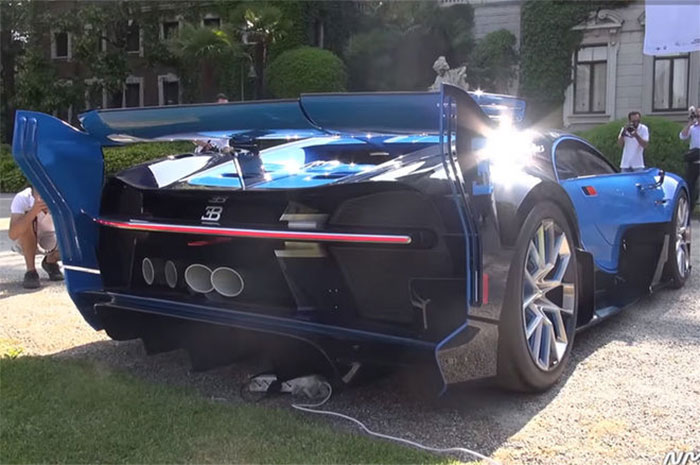 We have seen the Bugatti Vision Gran Turismo concept a few times at major car shows around the world. What we haven’t seen much of is the car actually moving under its own power. A video has turned up that shows the car at start-up, idle, and when the driver blips the throttle a couple times as the car is pulled into a trailer.

The video was recorded at the 2016 Concorso d’Eleganza Villa d’Este. That Bugatti 16 cylinder engine has a sound all its own and it’s crazy to think this beast has four cylinders more than the venerable Lamborghini V12. If you have missed this car before, it was originally designed to be a digital car for the Gran Turismo 6 game on the PS3.

It also has a few of the styling cues that later turned up on the Bugatti Chiron. That massive W16 engine has four turbos and makes 1500hp with 1165 lb-ft of torque. That is 300hp more than the Veyron Super Sport. The concept uses AWD and has a 7-speed dual clutch transmission.