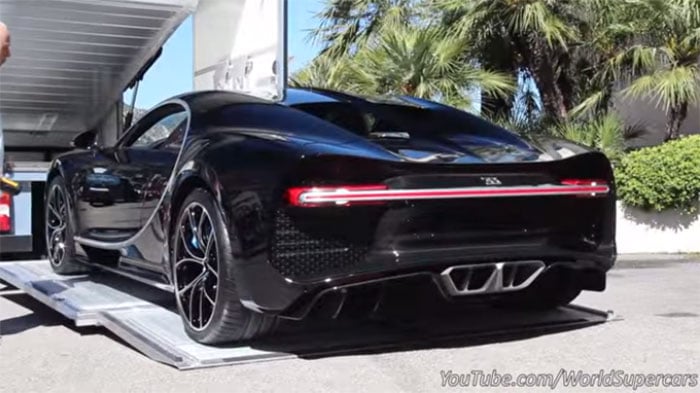 The Bugatti Chiron is the new hotness from the French hyper carmaker that wants to be the fastest car in all the land. Official production of the Chiron will kick off in September, but that doesn’t mean there aren’t a few of the cars in the world already. This video shows what is apparently a pre-production Chiron being delivered off a truck filled with millions of dollars worth of hyper cars.

The Chiron sounds incredible at cold start and then settles to a low rumble. This particular car is all black and I’m still not much of a fan of the design of the car. Bugatti crams a quad-turbo W-16 engine in the car and it is supposed to be able to reach 60mph in 2.4 seconds with a top speed as high as 280mph.

I’m not sure what hypercar dealership in Monaco received this car, but its wares are incredible. The sexiest car glimpsed in the video appears to be a Koenigsegg sitting tightly packed in a block of hypercar metal. Too bad we didn’t get to see this car opened up a bit. I’d wager the delivery guys knew the car was worth more than normal folk make in a lifetime and were on their very best behavior.