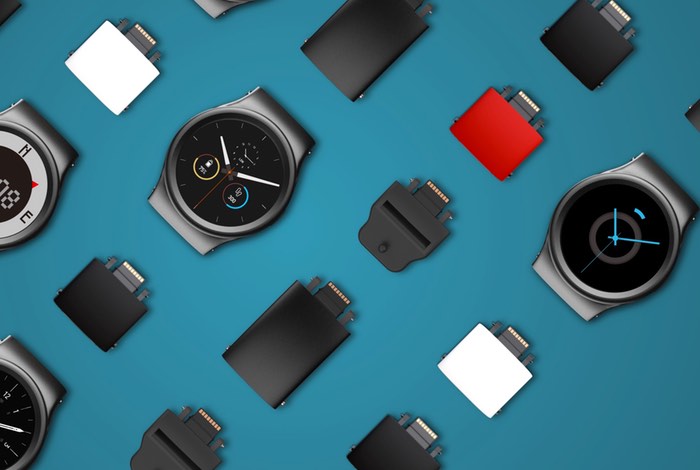 After securing $1.6 million via a successful Kickstarter campaign back in October 2015, the development team behind the BLOCKS Modular smartwatch. Are now preparing to start shipping the first wrist worn wearable devices to backers, and have released an official preview of what the finished smartwatch and modules will look like.

Unlike other smartwatches once you have made the initial purchase you can add extra functionality by purchasing just single modules which can be combined to suit your needs and requirements. Modules include the core module that is made up of an AMOLED display, processor, memory, storage, and wireless features.

The Core specifications include a Qualcomm Snapdragon Wear 2100 processor supported by 512MB of RAM with 4 GB of internal storage. The round AMOLED touchscreen display offers a resolution of 400 x 400 pixels and measures 1.39 inches in size. Other features include connectivity via both Bluetooth 4.1 and wireless 802.11b/g/n support as well as a 9-axis accelerometer, gyroscope, vibration motor and microphone.To the Core you can then add extra modules and BLOCKS is planning to make available modules for

The world’s first modular smartwatch is here. BLOCKS lets you choose the features and designs that best suit your lifestyle and needs. Normally, you have to settle for features the manufacturer decides. Until now. In addition to the modules we’re making, developers and companies all over the world are creating modules for you. By opening our platform, you can now choose from an unprecedented range of smartwatch features. BLOCKS puts the choice back in your hands.

For more information on the new BLOCKS smartwatch and to pre-order jump over to the official website for details by following the link below.