The Blackberry Storm was officially announced in the US by Verizon Wireless and Vodafone.

The Blackberry storm features a 3.25 inch touchscreen with a resolution of 480 x 360, and a built in accelerometer like the Apple iPhone.

Gone is the traditional built in qwerty keyboard that we have seen on Blackberry’s for some time, it is replaced by a visual touchscreen keyboard. 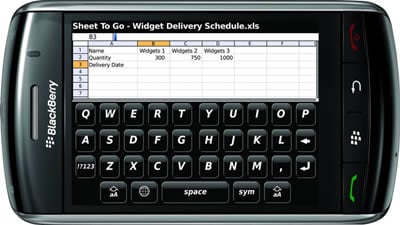 The Blackberry Storm also features built in GPS, a 3.2 megapixel camera, Bluetooth, built in hands free and 1GB of on board memory with the option for expansion via the MicroSD card slot.

Blackberry has also launched an online simulator and a set of new developer tools for developers who want to write applications for the new Blackberry Storm and other new handsets.

Full details of the online simulator and developer tools can be found here.