The BioShock Infinite Siege of Columbia board game allows players to fighting to control or destroy the floating city of Columbia as one of its two warring factions. rather than playing as the lead roles from the video game Booker and Elizabeth. 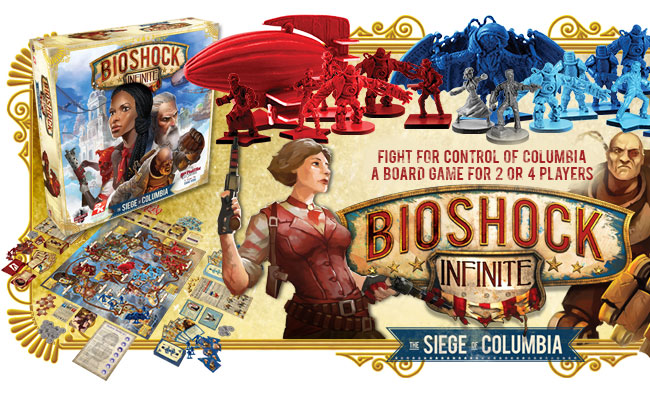 The game board included with BioShock Infinite Siege of Columbia is split into Columbia’s many areas, all linked by skylines, wildcards of Booker and Elizabeth available to help your quest. Both Founder and Vox Populi teams get an army of figurines to command, including the Handyman, Songbird and rebel leader Daisy Fitzroy.

“1912. The magnificent floating city of Columbia, intended to be a shining symbol of American exceptionalism , has been disavowed by the very nation that created it. Part world’s fair and part battleship, Columbia has erupted into civil war as two sides vie for control of the most important city on Earth.

The nationalistic Founders seek to prove that Columbia is even more American than its motherland, and the anarchistic Vox Populi seek to burn the floating city out of the sky. Caught in the middle of the infighting is disgraced former Pinkerton agent Booker DeWitt, and Elizabeth, a mysterious young woman fated to be Columbia’s salvation or the bringer of its doom.”

If you are interested in owning a copy of the BioShock Infinite Siege of Columbia board game it is now available to pre-order from Plaid Hat Games for $60 and will be shipping within the next 2-5 months.