Belkin has announced that its Dyle Mobile TV receiver for Apple gadgets is now available to purchase. The mobile TV receiver is designed to enable live broadcast television content to be watched on your iPhone or iPad when used with the Dyle TV app. The receiver and amp combo does not use Wi-Fi or mobile networks to stream content, it picks up live TV over the air in 37 major markets around the country. 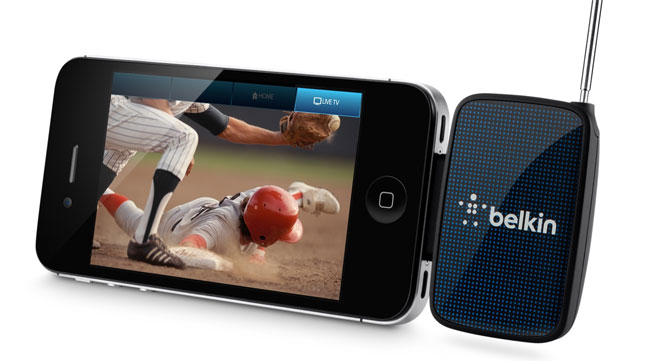 The TV tuner does have a pass-through micro USB port to allow charging of the device while watching content. The tuner also ships with a neoprene carrying case and has an extendable antenna allowing it better reception. The Dyle Mobile TV receiver is available right now for $129.99 via Belkin and can be pre-ordered on Amazon. The TV service is also available without subscription fee.

“While mobile broadcast technology has been around for a while, the Belkin receiver accessory with Dyle mobile TV enables consumers to receive local broadcast television on a device they already own,” said Nate Kraft, director of product management at Belkin. “It’s plug-and-play simplicity, with no wireless data limits or the need for Wi-Fi. Consumers can enjoy live TV anywhere—from the waiting room to the bus stop.”