A fantastic video has been created by Globaïa that shows all the transportation routes around our planet Earth. including all the roads, shipping lanes and flight paths, linking the continents together.

The animation was created by Globaïa for the short film ‘Welcome to the Anthropocene’ commissioned for the Planet Under Pressure conference. Where Scientists discussed the possibility of starting a new geological era, called the Anthropocene. Which encapsulates the period of geological, environmental and biological transformation of the planet by humans. 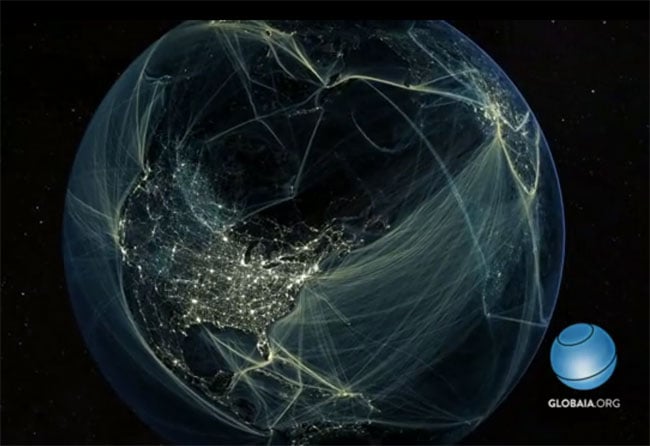 The name Anthropocene has been created from, “anthropo” which means human and “-cene” meaning new, and refers to the effect of humans on Earth ecosystems. Wikipedia explains:

“The Anthropocene is a recent and informal geologic chronological term that serves to mark the evidence and extent of human activities that have had a significant global impact on the Earth’s ecosystems. The term was coined by ecologist Eugene F. Stoermer but has been widely popularized by the Nobel Prize-winning atmospheric chemist Paul Crutzen, who regards the influence of human behavior on the Earth’s atmosphere in recent centuries as so significant as to constitute a new geological era for its lithosphere.

In 2008 a proposal was presented to the Stratigraphy Commission of the Geological Society of London to make the Anthropocene a formal unit of geological time.”