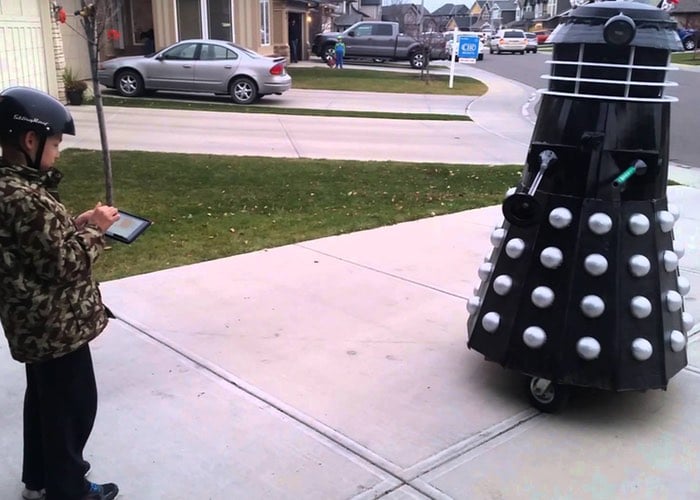 Ron Ostafichuk has unveiled an awesome project which he has created using the popular Raspberry Pi mini PC to create a fully automated and controllable Dalek from the Doctor Who series.

The Daleks have been the nemesis of the Doctor since the early days and the life size replica Dalek can be controlled using a tablet control panel using a web interface to send commands to the Raspberry Pi mini PC inside.
Check out the video to learn more and see the awesome Raspberry Pi Dalek in action complete with light effects. Its creator Ron Ostafichuk explains more :

Many kids and parents had fun watching the Dalek terrorize the neighborhood this halloween. It is sad that I only seem to have time to drag this out on Halloween. I did manage to solve my belt slip problems, but after a night of driving around the seat motors are getting slower and slower. Looks like I will need to upgrade the drive train over the winter, hopefully next year it will finally be ready to exterminate my lawn.

My son wanted to try out the Dalek with the new Web interface. He seems to have figured it out with no problem. The drive components are not standing up to continued use so next year I will be upgrading it to use an old mobility scooter.

For more information on the new Dalek powered by a Raspberry Pi mini PC jump over to the Ron Ostafichuk website for details via the link below.