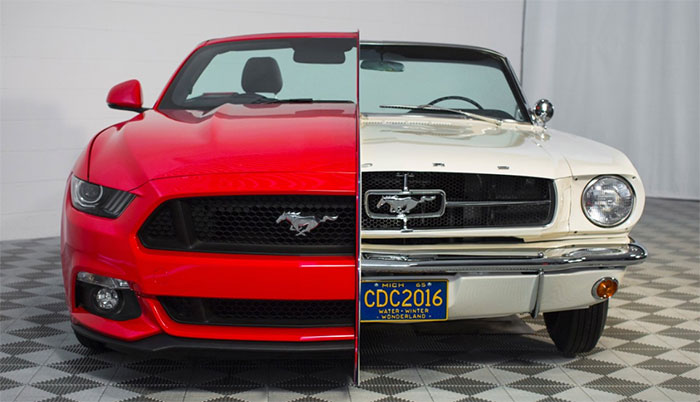 Ford has put together a very cool display that puts a 2015 Mustang side by side with a 1965 Mustang. The display was constructed to showcase 50 years of Mustang innovation for the National Inventors Hall of Fame Museum. The display will be a permanent part of that museum and both the 2015 and 1965 Mustangs were split lengthwise and have two functional driver compartments.

The museum chose the Mustang as a symbol of automotive innovation over the last 50 years. The split Mustang will be part of the permanent Intellectual Property Power exhibit at the National inventors Hall of Fame museum on the US Patent and Trademark Office Campus in Alexandria, Virginia.

The 1965 Mustang had several key features inside that were covered by Ford patents including things we take for granted today like self-cancelling turn signals and power convertible top. “Everything moved so fast in the design and run-up to production of the original Mustang that there were no styling patents issued back then,” says Chris Danowski, Ford director of technology commercialization and intellectual property licensing. “Now look at the current car; 2015 Mustang Convertible alone was granted 36 styling patents, which ensure the unique look stays with the car. It also has many unique functional patents for things like the airbag structures, 911 Assist® and so many other technologies baked right in.”