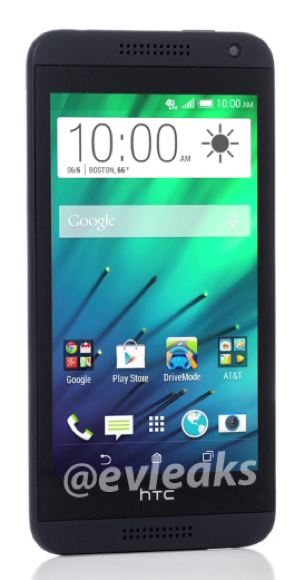 We have been hearing rumors that the HTC Desire 610 would be headed to U.S. mobile carrier Verizon, and now a press shot of the handset has been leaked for AT&T.

The photo above was posted on Twitter by @evleaks, and it looks like the handset will be headed to AT&T some time soon, although as yet there are no details on a specific launch date.

As a reminder the Desire 610 features a 4.7 inch qHD display that has a resolution of 960 x 540 pixels, processing comes win the form of a 1.2GHz Snapdragon 400 processor, the handset also features 1GB of RAM and 8GB of built in storage.

If you need additional storage, the device is equipped with a microSD card slot for expansion, this will allow you to add in an extra 64GB of storage.

Other specifications on the HTC Desire 610 include a 1.3 megapixel front camera and an 8 megapixel rear camera, the rear camera comes with HDR, Face Detection, an LED flash, auto-focus and Geo tagging. The device is also equipped with a 2,040 battery, 801.22 a/b/g/n WiFi and Bluetooth 4.0.

When the HTC Desire 610 launched in the UK it came with Android 4.2.2 Jelly Bean and HTC Sense 5.5, it is not clear as yet whether the US version of the handset will come with Android 4.2.2. or Android 4.4 Kit Kat at launch. As soon as we get some more details on a release date, we will let you guys know.