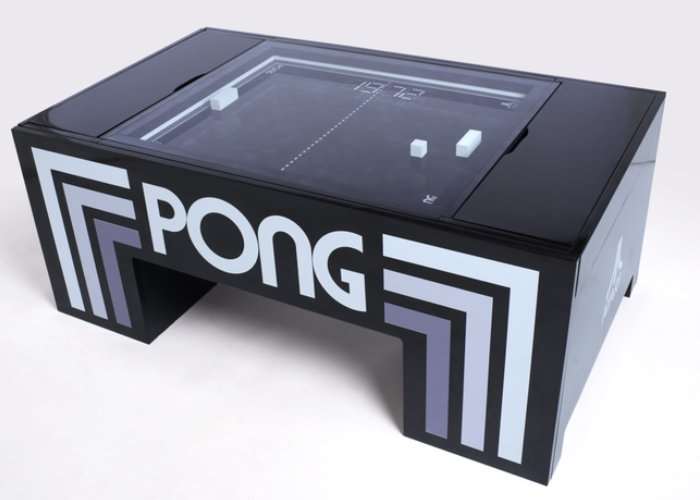 Gamers searching for a more unique and original coffee table may be interested in the Atari PONG coffee table which is being created by Gerardo Orioli, and allows you to play the classic PONG game thanks to a magnetic control system hidden under the table surface.

Watch the demonstration video below to learn more about the Atari PONG table which has been licensed by Atari and is available via Kickstarter this month with pledges starting from $900 for super earlybird backers.

When everything seems to flow into the digital world aimed for individual playing, this project appears as a rebellious retro futuristic version of the Atari PONG game, which brings the backwards process, from digital to physical, to the table.

Originally developed as a tribute to one of the most iconic games ever, the plan of Table Pong Project was to bring back the same experiences you used to get when playing the digital version. Loaded with retro sounds, bouncing lights and maintaining the same mechanics to stay true to the original gameplay.

Also, reuniting family, friends and stimulating social interaction opportunities, as the old Atari console did.
Thanks to electronics, electric motors and magnetic fields, we managed to create a playable coffee-pong table that comes not only with the game but also a classic digital clock displayed on its top, usb ports mounted on the rack and the possibility of streaming music via Bluetooth. Atari PONG licensed us so we are bringing it back, in an original, stylish and super fun way!