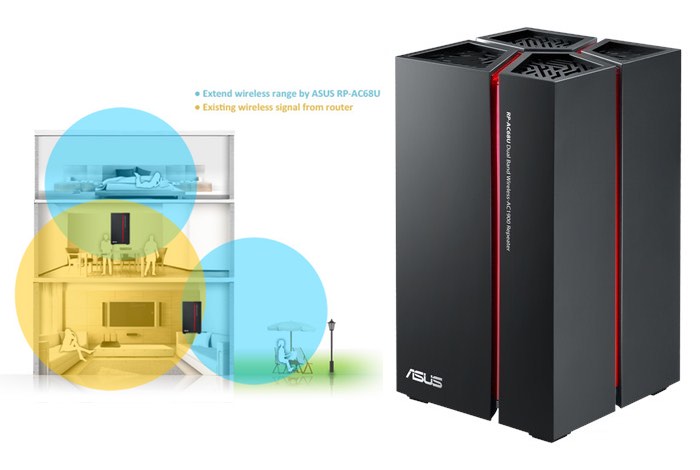 Following on from the unveiling of their new VivoMini VM65N mini PC last week which is now being launched in Singapore this week, Asus has also announced the launch of their new RP-AC68U dual-band Wi-Fi repeater in Singapore.

The new wireless repeater created by Asus is equipped with four internal high-performance antennas and has been designed to enable users to extend the coverage area of their existing 802.11ac wireless network.

Providing speeds of up to 1,900Mbps thanks to the antennas that 3 of which transmit and 4 receive data. Other features on the wireless repeater include the inclusion of a handy USB 3.0 port together with five Gigabit Ethernet ports as well as support for the Asus AiCloud technology.

The RP-AC68U wireless repeater has powerful internal MIMO antennas that help to eliminate signal dead zones and improve the coverage of any existing wireless router. It works as a repeater, which means it can extend wireless networking to every corner of the home — even to those difficult, hard-to-reach spots. With blindingly-fast 802.11ac speeds up to 1900 Mbps, it’s ideal for extending your existing 802.11ac Wi-Fi network. This ensures reliable high-speed internet coverage everywhere for devices such as notebooks, tablets, smartphones, game consoles and smart TVs.

– Extend your existing 802.11ac dual-band Wi-Fi network with speeds up to 1900 Mbps.
– Quick and secure setup with just a press of the WPS button.
– Smart LED signal indicator helps you find the best location for optimum Wi-Fi performance.
– USB 3.0 port for AiCloud support and fast NAS performance.
– 5 Gigabit Ethernet ports to convert any wired network devices to wireless operation.
– ASUS ExpressWay uses full-speed device connections to boost performance.
– Roaming Assist helps you to get a stable connection everywhere in the home or office.

As well as now being available to purchase in Singapore the Asus wireless repeater is also available worldwide priced at around £140.