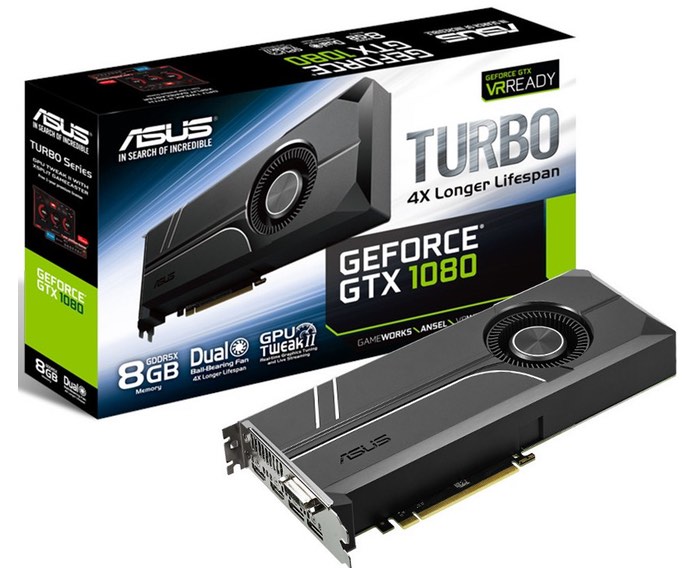 Today ASUS has unveiled a new addition to their range of graphics cards with the launch of the new ASUS GeForce GTX 1080 Turbo model reference : TURBO-GTX1080-8G. Which features a lateral-flow cooling solution and has been designed to push hot air out of the case.

When the card launches it is expected to be priced between $599 and $679 although no exact launch date or pricing has been announced by ASUS at the current time. But as soon as more details are made available we will keep you updated as always.

ASUS announced the GeForce GTX 1080 Turbo graphics card (model: TURBO-GTX1080-8G). Positioned below its ROG GTX 1080 STRIX, the card is expected to be priced somewhere between the $599 baseline NVIDIA set for this SKU, and the $679 price at which the company sells the STRIX. Much like the reference-design (Founders Edition) card, the GTX 1080 Turbo features a lateral-flow cooling solution, which pushes hot air out of the case.

The other two things this card has in common with the reference board is clock speeds – 1607 MHz core, 1733 MHz GPU Boost, 10 GHz (GDDR5X-effective) memory; and the need for just a single 8-pin PCIe power connector. The card features an RGB LED lit “ASUS” logo along its top. You also get one 4-pin PWM case-fan header, with which you can drive at least one case fan in sync with the GPU temperatures (the GTX 1080 STRIX features two such headers). The display output layout is similar to the GTX 1080 STRIX, with two each of DisplayPort 1.4 and HDMI 2.0b ports.