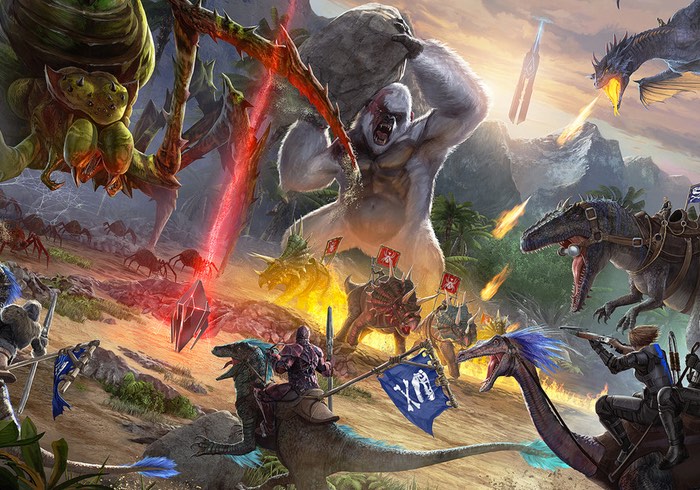 The developers of ARK: Survival Evolved today announced the launch of the new ARK: Survival of the Fittest stand-alone multiplayer online survival arena, which has been specifically built for eSport gameplay and is now available to play totally free of charge.

Check out the announcement trailer below to learn more about what you can expect from the ARK: Survival of the Fittest multiplayer game which is now available to download via Steam for free.

Survival of the Fittest includes over 75 creatures that are available to tame and ride at launch as well as multiple official game modes such as FFA, 2 Player Tribes, 4 Player Tribes, and 6 Player Tribes. Its developers explain more :

We are excited to announce that ARK: Survival of the Fittest is now available as a totally free, standalone, ‘Multiplayer Online Survival Arena’ built for eSport gameplay!

SotF originated as a spin-off mod which came to be with the release of our ARK: Survival Evolved development kit. The mode was first available as a ‘Total Conversion’ and debuted worldwide with a 70-person slaughter fest of a tournament. Following the success of the game mode, tournaments, and feedback from the community, SotF has been refactored into its own competitive game including four new modes, a robust ranking system, massively boosted performance, cosmetic-tiered rewards, lobbies/parties/on-demand-matchmaking, and constant iteration. That’s not all though! On top of releasing as a free game, SotF will also be awarding cash prizes for the top players in each ‘Survivor League’, so ARK survivors can start playing their favourite game at a professional competitive level!

Survivors can form one to six person Tribes with the options to choose Unofficial (Player-Hosted) and Official (Ranked) servers, and a variety of game-lengths and sizes in which to play. Players will start in the base forest environment introduced in the original ARK: Survival Evolved, with new environments and creatures introduced as the game evolves. Dedicated eSport rankings, matchmaking, reward, and upcoming Tournaments make ARK: SotF readily accessible to all players and after each month we’ll be awarding over $50,000 to the Top-10 Ranked Players in each of the four game modes, referred to as the ‘Survivor League’!

To find out more about the Survivor League jump over to the Steam games network for more details via the link below.