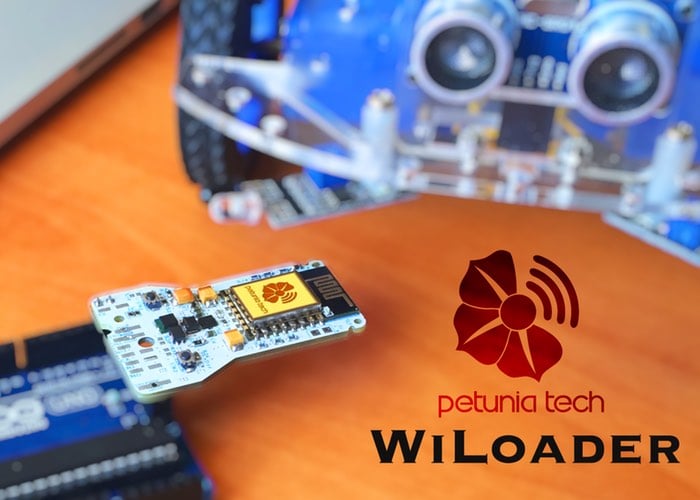 Arduino hobbyists, developers and programmers that would like to be able to remove the need to use cables to access their Arduino projects, might be interested in a new wireless programmer specifically designed for Arduino projects called the WiLoader.

WiLoaderHas been designed by Petunia Tech basing Pasadena California and has recently been launched by the Kickstarter crowdfunding website with the aim of raising $40,000 over the next 40 days to go into production.

Watch the video below to learn more about this wireless programming adapter that can be fitted to almost any Arduino project, its developers explain little more about its features and functionality.

WiLoader is easy to set up, use and control. Since Arduino is an open source software and also has a lot of cool features and rich libraries, we implemented a modified version of Arduino IDE to support and handle all WiLoader capabilities. WiLoader can be chosen like any other programmers inside the Tools menu. It is compatible with all operating systems and it performs flawlessly.

WiLoader has a WiFi-UART bridge called WiCOM. You can send and receive serial data over WiFi by connecting WiLoader dedicated serial pins to AVR UART pins(RX, TX). Just like other COM ports that Arduino serial monitor uses for communicating and debugging MCUs.

WiLoader is a really good and wise choice when you are working with robots or any kind of portable devices . It can program your boards on the go without stopping and connecting it to a computer every time.You can even create a customized app for PC or Phones to control your robots by sending commands over WiFi. Also this WiFi-UART Bridge can be used to monitor robot status and sensor values. So robotic fans are in for a treat.

Visit the Kickstarter website via the link below to make a pledge from $29 for a single WiLoader.