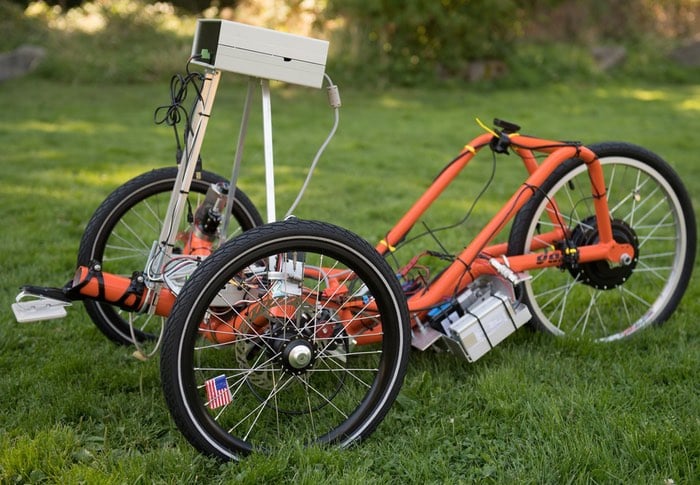 A research team at the University of Washington headed by professor Tyler Folsom, have created autonomous self driving tricycle using an Arduino microprocessor, and support of Amazon’s Catalyst program, as well as from software company Kerika.

Check out the video below to learn more and jump over to the University of Washington blog via the link below for the full story.

On a shaded campus lawn on a summer afternoon, Jeremy Bobotek sent a signal to a three-wheeled vehicle strapped with electronics, batteries and mechanical gear. The orange contraption quickly executed a circle, making him hop out of its path.

Bobotek had sent the signal from a controller, like a remote control device. But he wasn’t controlling the wheels like you would with a toy car. He simply told the vehicle to make a circle. It did so by driving itself.

The effort to get autonomous tricycles rolling is ramping up with a $75,000 grant from Amazon Catalyst, an initiative by the Seattle-based online retailer and UW’s collaborative innovation hub CoMotion. The aim is to promote bold projects with global impact proposed by members of the University of Washington community.

The Amazon grant enabled Folsom to hire five interns plus a visiting scholar from India, Shailja (who does not use a surname). She completed her electrical engineering degree las summer from the India Institute of Technology in Kharagpur where she worked on visual navigation for a mobile robot.