Research group Canalys has released some data on the smartphone shipments for the US for the 3rd quarter of 2010, with Apple reaching 26.2 percent of all smartphones shipped, this puts them ahead of RIM, making them the most popular smartphone manufacturer for Q3.

The top spot for the most popular mobile platform goes to the Open Handset Alliance, and Google’s Android platform, which is used by a wide range of manufacturers, who grabbed 43.6 percent of the total smartphone market for Q3. 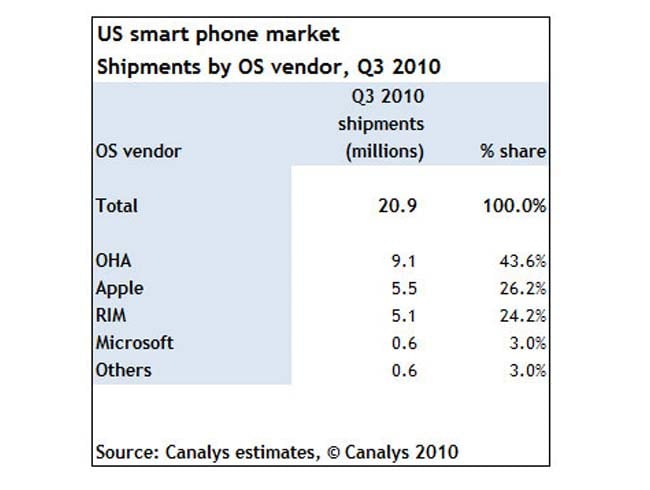 In Q3 2010, the worldwide smart phone market grew an impressive 95% over the same quarter a year ago to 80.9 million shipped units. Nokia retained its leadership position, albeit by a diminished margin, with a 33% share of the market. Apple’s healthy performance this quarter saw it achieve a 17% share worldwide, a little ahead of RIM, which held a 15% share this quarter.

You can see full deatils over at Canalys. Have a look and our article on Android vs iPhone to see which smartphone and mobile platform is best for you.