Things are going in the right direction for the Cupertino-based company. A few months back, Apple managed to end the 13-year long reign of Coca Cola to become Interbrand’s most valuable brand, followed by the likes of Google Microsoft, IBM, etc. Now, the folks at Forbes released their list of most valuable brand list. Surprisingly, Apple managed to gain the top spot the third time in a row with an estimated brand value of $104.3 billion. 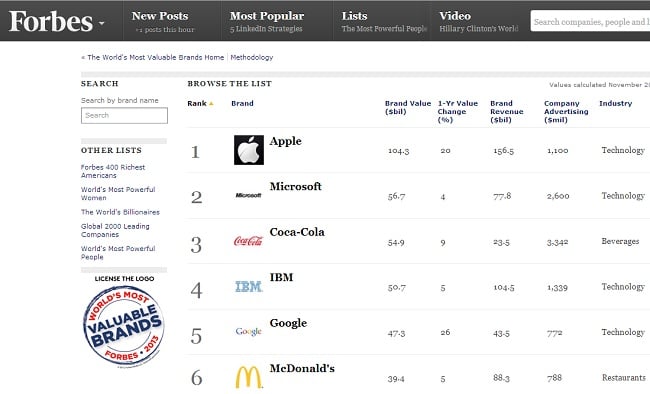 The Cupertino company is followed by Microsoft, Coca-Cola, IBM and Google as the top five contenders in the list. The companies on the second and third number are way below Apple in terms of the brand value, despite the fact they spent millions in advertising and marketing campaigns, which are way more than what Apple has spent on advertising.

The most interesting company in the list appears to be Samsung who’s sitting on the ninth spot in the World’s Most Valuable brand, which managed to improve its ranking by  53 percent compared to last year, and a whopping 130 percent if you take the past three years in to account. The Korean OEM spent a whipping $4.4 billion on advertising with a brand value of just $29.5 billion and a brand revenue of a whopping $181 billion. The way they’re growing, they may claim a spot in the top 5 in the next few years.

What’s your take on this?