Apple [AAPL} has released the latest version of its web browser for Mac and Windows, Safari 5 which comes with a range of new features and improved developer tools.

Safari 5 now supports more than a dozen new HTML5 technologies, which according to Apple will allow developers to create rich, dynamic websites. 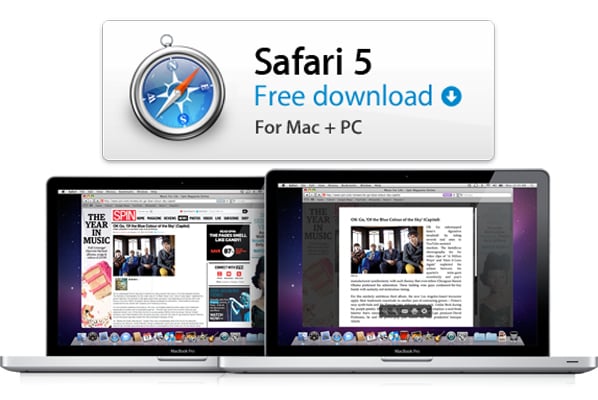 Apple has also added Safari Reader which is designed to make it easy to read single and multiple articles on the web by presenting then in a new scrollable view without any content or clutter.

You can see full details of what is new in Safari 5 in the press release below.

SAN FRANCISCO—June 7, 2010—Apple® today released Safari® 5, the latest version of the world’s fastest and most innovative web browser, featuring the new Safari Reader for reading articles on the web without distraction, a 30 percent performance increase over Safari 4,* and the ability to choose Google, Yahoo! or Bing as the search service powering Safari’s search field. Available for both Mac® and Windows, Safari 5 includes improved developer tools and supports more than a dozen new HTML5 technologies that allow web developers to create rich, dynamic websites. With Safari 5, developers can now create secure Safari Extensions to customize and enhance the browsing experience.

Safari Reader makes it easy to read single and multipage articles on the web by presenting them in a new, scrollable view without any additional content or clutter. When Safari 5 detects an article, users can click on the Reader icon in the Smart Address Field to display the entire article for clear, uninterrupted reading with options to enlarge, print or send via email.

Powered by the Nitro JavaScript engine, Safari 5 on the Mac runs JavaScript 30 percent faster than Safari 4, three percent faster than Chrome 5.0, and over twice as fast as Firefox 3.6.* Safari 5 loads new webpages faster using Domain Name System (DNS) prefetching, and improves the caching of previously viewed pages to return to them more quickly.

The new, free Safari Developer Program allows developers to customize and enhance Safari 5 with extensions based on standard web technologies like HTML5, CSS3 and JavaScript. The Extension Builder, new in Safari 5, simplifies the development, installation and packaging of extensions. For enhanced security and stability, Safari Extensions are sandboxed, signed with a digital certificate from Apple and run solely in the browser.

Pricing & Availability
Safari 5 is available for both Mac OS® X and Windows as a free download at www.apple.com/safari. Safari 5 for Mac OS X requires Mac OS X Leopard 10.5.8 or Mac OS X Snow Leopard® 10.6.2 or later. Safari 5 for Windows requires Windows XP SP2, Windows Vista or Windows 7, a minimum 256MB of memory and a system with at least a 500 MHz Intel Pentium processor. Full system requirements and more information on Safari 5 can be found at www.apple.com/safari. The Safari Developer Program is free to join at developer.apple.com/programs/safari.

*Performance will vary based on system configuration, network connection and other factors. All testing conducted by Apple in May 2010 on an iMac® 3.06 GHz Intel Core 2 Duo system running Mac OS X 10.6.3, with 4GB of RAM. JavaScript benchmark based on the SunSpider 0.9.1 JavaScript Performance test.