Ryan Orr of Re:form Designs has taken two old style Apple Power Mac G4 Towers, and transformed the retro computers into a funky coffee table.The coffee table has been named the Crunching Numbers, which looks fantastic, with a few additional extras added to virtually connect the two towers together. 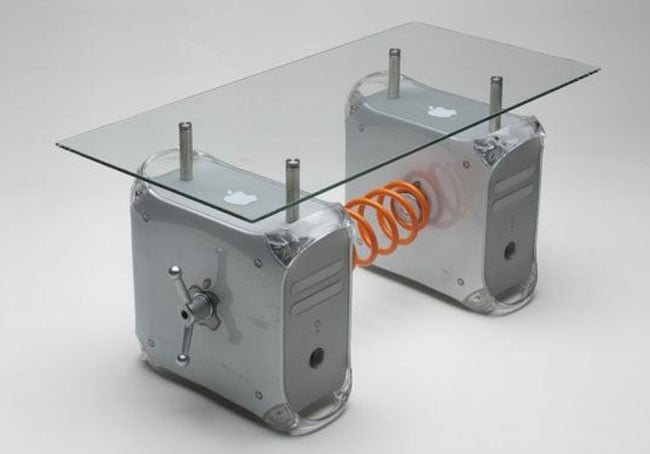 When Apple first launched the Power Mac G4 back in 1999 until 2004 the towers were the cutting edge of Apple’s range . The original Apple Power Mac G4, which was code name “Yikes!” during development, was first unveiled at the Seybold conference held in San Francisco on 31st August 1999, and was originally offered with options for a 400 MHz, 450 MHz and 500 MHz processor to be installed.

“The G4 model is available in three different chassis styles – slate blue, “Quicksilver”, or mirror door – and is available “all natural”, or can be upgraded with coatings or details tailored specifically for you!”

The Apple Power Mac G4 Tower Crunching Numbers coffee table is now available to purchase for £450 around $600, with other styles available made from G3 systems and similar.