Apple [AAPL] has just announced that the WiFi model of the iPad will begin shipping in the US on April the 3rd, with preorders being taking from the 12th of March.

I have just checked Apple’s UK store online and it is still showing that the iPad will ship in March, this will probably be updated to April, as we reported earlier when we revealed the UK iPad Pricing, as our tipster had told us that shipments would begin in April instead of March. 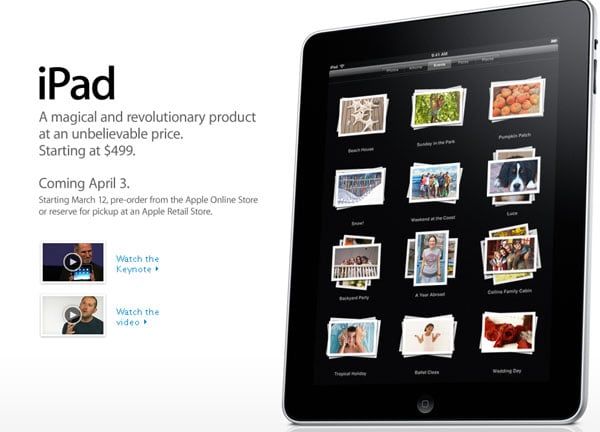 Apple has also said that the 3G models of the iPad will also ship late on in April, so this is probably going to be the end of the Month. Prices start at $499 for the 16GB WiFi model in the US, Apple have yet to confrim UK pricing as yet, but our tipster told us that the 16GB WiFi model would go on sale in the UK for $389.

Apple will no doubt update their UK site shortly with these revised shipping dates, lets hope they also confirm the pricing for the UK at the same time.

Update: It looks like we are looking at a ‘Late April’ release for the iPad in the UK.

Don’t forget to check out Geeky Gadgets review of the Apple iPad.