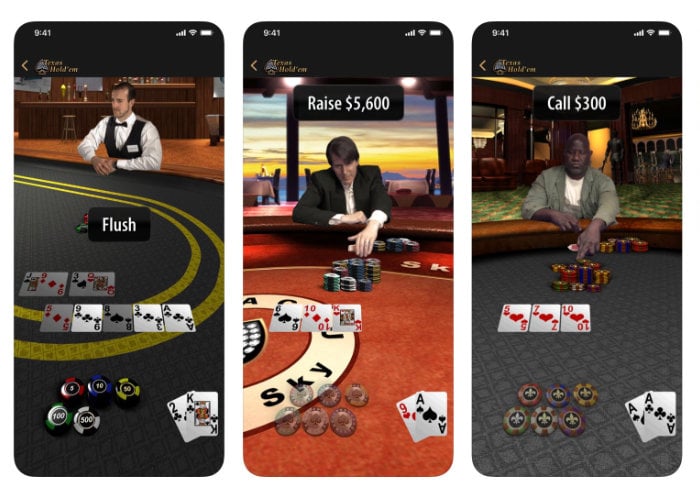 To celebrate the Apple iOS App Store 11th anniversary, Apple has this week released a new update to its iOS ‘Texas Hold’em’ game. The iconic Texas Hold’em game was actually released back in 2006 before the Apple App Store even launched and was initially available for the Apple iPod before game was released for the iPhone in 2008. Unfortunately Apple removed the game from the App Store back in 2011 but is now revamped it to work with the latest devices in version 2.0.

The latest iOS Texas Hold’em game includes 10 poker venues, and winning at one means you’ll move onto the next and will even work off-line in this connected world. Other features include the ability to play against eight other friends in multiplayer mode, and a choice between either top-down or first person gameplay. The iOS poker game is now available to download and will take up roughly 1.5 GB of space on your iOS device.

“Apple’s Texas Hold’em is back! To celebrate the 10 year anniversary of the App Store, we’ve brought back one of its first games, a popular classic. Originally created for iPod, then brought to iPhone, fans will love the polished redesign, featuring new characters, more challenging gameplay, and stunning graphics for the newest iPhone and iPod touch. Players will also love that it’s free to play—for the very first time.

Texas Hold’em lets you play like a pro against 24 realistic opponents—or with your friends over Wi-Fi. Use all of the hints, tips, tells, and your mastery to gain access to more challenging locations with higher stakes and even bigger rewards!”

Features of Texas Hold’em
– Opponents bet, bluff, and have secret tells
– Winning advances you to the next location
– Includes 10 distinctive locations—including Las Vegas, Paris, and Macau
– Bring up in-game hints, tips, statistics, and player ratings
– Texas Hold’em is entirely free-to-play, works online or off
– Play against up to 8 friends with Wi-Fi multiplayer
– Rotate between immersive first-person and top-down gameplay
– Re-designed, re-rendered, and re-built to use high-resolution graphics that look stunning
– Designed for iOS 12 and later