As well as showing us a new range of features in Mac OS X Lion at this years WWDC Apple as also shown off the latest version of their mobile OS for the iPhone, iPad and iPod Touch iOS 5.

iOS 5 will bring a range of new features to iOS devices, and Apple has detailed 10 of them in today’s WWDC keynote, which include new notifications, that will be displayed on your iPhone’s lock screen. 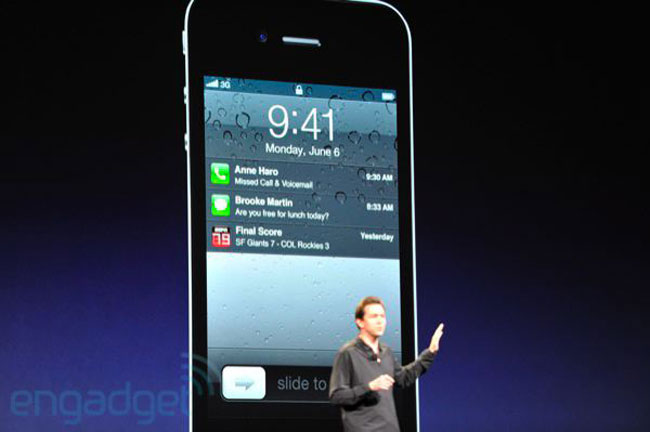 The lock screen will display notifications from a range of apps including missed calls, messages, tweets, Facebook updates and many more. Another new features in iOS 5 is called Newsstand, which will be supported by a wide range of publications like National Geographic, Vanity Fair and many more, you will be able to purchase and directly download items from Newsstand to your iOS device.

Number three is Twitter, which has now been integrated within many applications within Apple’s iOS, which include the camera and also photos, allowing you to easily posts your photos to Twitter.

Safari now features Safari Reader built in, which lets you read a story, without any adverts or anything else, and it works kust kike it does on the Mac, antother new feature in Safari is ‘Reading List’, which apple describes as a simple way to ‘read it later’, Apple has now also added tabbed browsing to Safari for iOS and it works just like the Mac version does on your iOS device.

Next up is reminders, you can store lists of things to do, and then add a reminder to it and also a date, plus you can even assign a location to it, and these reminders can be synced across iOS device with iCal.

The camera for iOS has also been updated, there is now a camera button on the lock screen, that will let you take a photo really quickly without having to unlock your device, this sounds like a really useful feature.

One thing that Apple has added to the camera app that will be welcomed by many is the ability to take a photo using the volume button on your iPhone, and you will also be able to edit your photos from within the camera app.

Next up is mail, which has a range of new features that include indentation, rich text formatting, dragable addresses, and the ability to search and also flag emails, plus a built in dictionary that is available across iOS and any apps from the app store will be able to use it.

The next new feature in iOS is called ‘PC Free’, which means that Apple will start delivering software updates to iOS devices Over The Air (OTA), you will also be able to setup a new iPhone, iPad or iPod Touch without having to tether it to your PC or Mac.

Apple also announced a new messaging service between iOS users called iMessage, so basically you will be able to send a message to your friends on their iPad or iPad touch just like you would with a text message on your iPhone.

Apple are Releasing the iOS 5.0 SDK to developers today, and Apple announced that iOS 5 will support the same iOS devices as the last update did, so that would mean the iPhone 3GS, iPhone 4, iPad and iPad 2 plus the 3rd generation and 4th generation iPod Touch.

We don’t have an exact launch date for iOS 5.0, Apple only announced that it would be available this Fall.