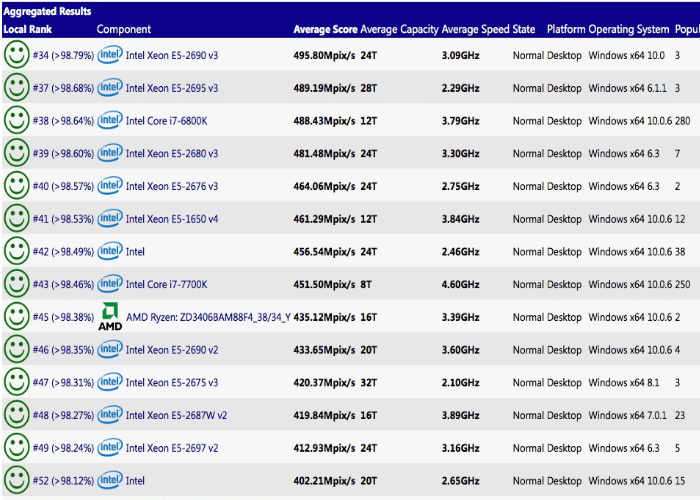 If you are interested in learning more about the new AMD Ryzen processors that are expected to launch on March 2nd, you will be interested in the leaked benchmarks which have been published this week offering a comparison against AMD’s competitor Intel.

The new AMD Ryzen chips have been designed to provide a huge performance boost over anything AMD has created previously, and the leaked benchmarks provide an indication that what we can expect.

Brad Linder explains more about the benchmark results which have surfaced this week :

According to those test results, the upcoming 3.4 GHz AMD Ryzen 7 1700X octa-core chip gets an overall core that’s only 9 percent lower than Intel’s Core i7-6900K processor, and 4 percent lower than the Core i7-5960X. In some individual tests, the Ryzen chip actually scores higher than either of those 8-core Intel chips.

As wccftech points out though, the Ryzen 7 1700X isn’t even expected to be the fastest chip in AMD’s lineup. The company also has a 3.6 GHz Ryzen 7 1800X processor on the way.

Probably the most impressive things about the benchmarks? AMD’s chip has a 95 watt TDP, compared with Intel’s 140 watt chips. And Intel charges $1000 or more for those processors, while rumor has it that AMD will charge less than $400 for the 1700X chip.

Meanwhile, HotHardware (via @InquisitionTech) has a slightly more apples to apples comparison: the 1700X comes pretty close in performance in the Sandra benchmark to the 91 watt, 4.2 GHz quad-core Intel Core i7-770K processor which sells for about $350.