The AMD Radeon HD 8970M and Richland A10-5750M are both available in MSI’s new GX70 3BE gaming notebook, providing a rebranding and minor clock speed increase from 7970M. 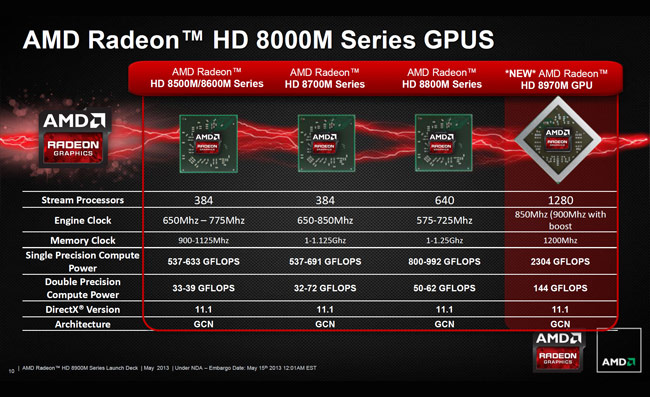 The new MSI GX70 3BE will be the first mobile computer to carry the new graphics chip and NVIDIA has yet to announce their GTX 780M, which is rumoured to be launching soon. The AnandTech website explains:

“The first notebook to ship with HD 8970M is MSI’s already discussed GX70 3BE, but more will certainly follow. At the very least, Alienware and Clevo notebooks are basically a gimme, considering they already support HD 7970M without issue.

Pricing will also likely continue to be in AMD’s favor—NVIDIA hasn’t made their highest performing mobile GPU competitive in price for a while, mostly because they apparently don’t need to. We’ll see if anything changes with the status quo this round, but outside of the software story the Radeon HD 8970M doesn’t bring anything truly noteworthy to the table. We’ll probably have to wait for 20nm mobile GPUs before we see major improvement in performance, but will have to wait until the next round of GPU updates.”

For more information on the new AMD Radeon HD 8970M jump over to the AnandTech website for details.