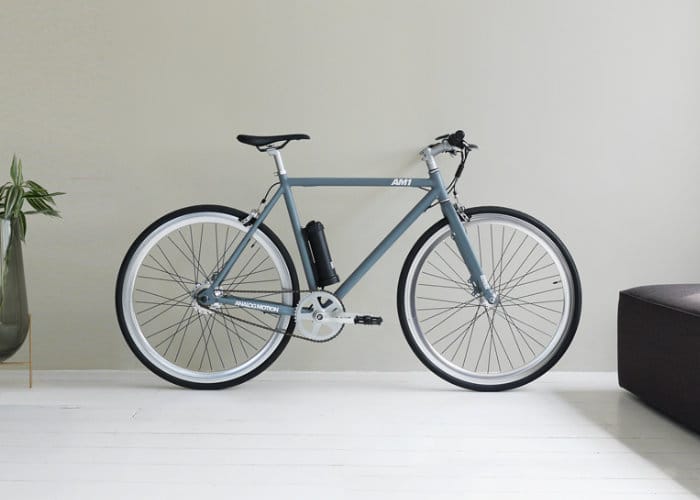 Bike designers and builders Analog Motion based in London, have this month launched a new crowdfunding campaign to raise funds to take their new AM1 electric bike into production. The AM1 has been specially designed to provide users with a lightweight (13.5kg or 30lbs) motorised bike that both looks and handles just like a bike, but offers extra propulsion when needed.

“The motor gives you a boost when you really need it. The sensor in the pedals delivers smooth, controlled power relative to the speed of your pedalling. Pedal slower to slow down, faster to speed up. Smile as you pass lycra-clad roadies with the knowledge that the AM1 probably costs less than their carbon fibre rear wheel.” The AM1 electric bike is now available to back with early bird pledges available from £499 or approximately $665. Offering 50 percent off the recommended retail price of £999 which will take effect once the crowdfunding campaign comes to a conclusion. Watch the demonstration video below to learn more about the electric bikes features and design. The AM1 has been inspired by the “simple and ultra-reliable mechanics of single-speed bikes, the AM1 has a single-speed in it’s DNA and electrons in it’s blood”.

“How does it work? The pedal sensor detects when you’re pedalling and assists you depending on how much effort you put in. Want to go faster with less effort, turn the assist up. Want to get your heart rate up, turn the assist down. With the assist off, the AM1 rides like a normal bike without the motor resistance often found on conventional electric bikes. The goods news is that all mechanical parts are compatible with standardised bike components. Support your local bike store and fulfil your ‘dog in basket’ dreams. BYOD.”

For a full list of all available pledges and specifications for the AM1 electric bike jump over to the official Kickstarter crowdfunding campaign page by following the link below. The campaign has already past its required pledge goal and will make the jump into the next stage of production and is expected to start shipping during December 2018.