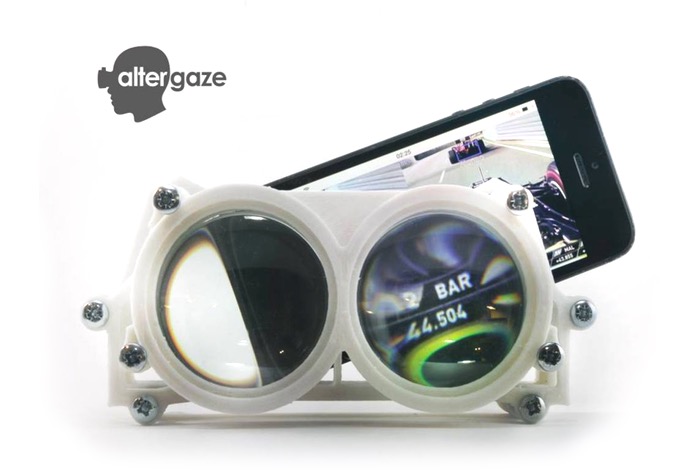 Altergaze the company behind the 3D printable virtual reality headset that was originally launched over on the Kickstarter crowdfunding website, back in March 2014.

Has this week announced they have launched a new website to enable interested parties that may have missed the Kickstarter campaign to place pre-orders for their smartphone-based virtual reality head mounted visor.

During their Kickstarter campaign the Altergaze VR vizor was developed for ithe Phone 5, 5C, 5S and iPod Touch 5th generation. However, Altergaze has now used 3D printing and crowd-manufacturing to redesign the Altergaze headset and make it compatible with any smartphone, regardless of operating system and display size. The company explains :

“Using a unique triple lens design, we can offer one of the highest image quality VR experience, custom built for your smartphone. With Altergaze we always use the full resolution of your display to offer an immersive and mobile VR experience.”

Any pre-orders that are now placed on the website are expected to ship to customers during March and April of this year. Altergaze also offers a fast-track delivery service where they will aim to deliver the unit to you within 30 days of placing your order.

For more information on the new Altergaze virtual reality vizor jump over to the new website for details and the ability to make a pre-order.