Samsung has scheduled its “Unpacked” press event on 24th February in Barcelona, Spain, the day when the event will kick off. And, if you can’t recall, Samsung usually launches its flagship devices on the Unpacked events, and this time it could be the highly rumored Samsung Galaxy S5.

As the expected launch date gets closer, we get to see more information about the purported Samsung Galaxy S5. Recently, a device was spotted on AnTuTu benchmarks that is rumored to be the upcoming Samsung Galaxy S5, and gives us a glimpse of the hardware it could bring at the table. 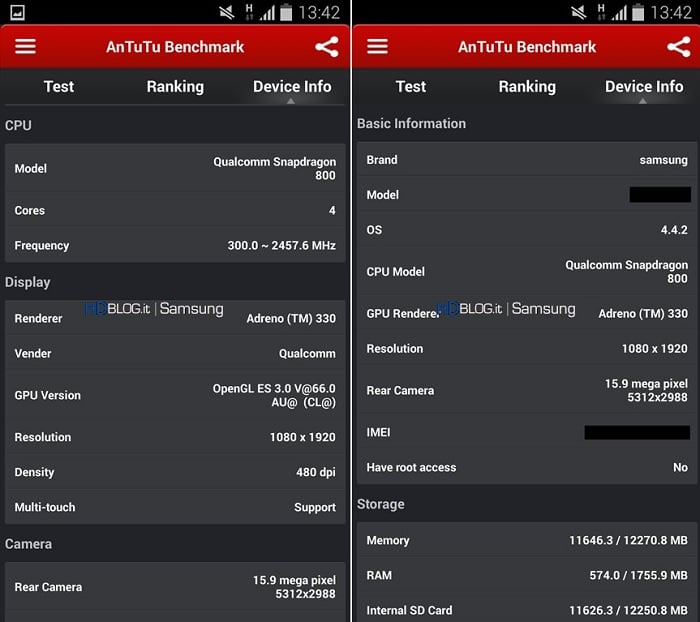 Well, the results didn’t mention its the Samsung Galaxy S5, but the presence of the 16MP camera and Android 4.4.2 KitKat hints that it might be the company’s upcoming flagship device. According to the results, it is powered by a Snapdragon 800 chipset with Adreno 330 GPU, 2GB of RAM, 16GB internal storage and comes with a 1080p resolution.

Now that’s what the AnTuTu benchmarks mention, and we’ve heard most of the things that are different. Firstly, rumors suggest that it will come with 2560 x 1440 pixels resolution, which should still be intact, and there’s a possibility it’s the early prototype of the device with 1080p resolution.

It also shows that the alleged device is running 2GB, which is out of question as Galaxy Note 3 comes with 3GB of RAM, and so the company’s flagship should also feature at least 3GB — some rumors pointed towards 4GB of RAM. It’s also worth noting that Samsung Galaxy S5 will come with Snapdragon 805 when it launches.

Well, this one could be an early version of the device that was being tested by Samsung, as we’ve seen several rumors that points to higher specifications.

Samsung Unpacked event is right around the corner, and we’re hoping the Korean OEM will take the wraps off of its flagship device. We’ll update you as soon as it happens.