We have seen a number of different photos of the all new HTC One, and now another one has been posted online by @evleaks, and this one gives us a better look at the rear cameras on the handset.

As you can see from the photo below the HTC One will come with dual camera on the back, this is something we saw in previous photos, but the new photo gives us a closer look at the dual cameras. 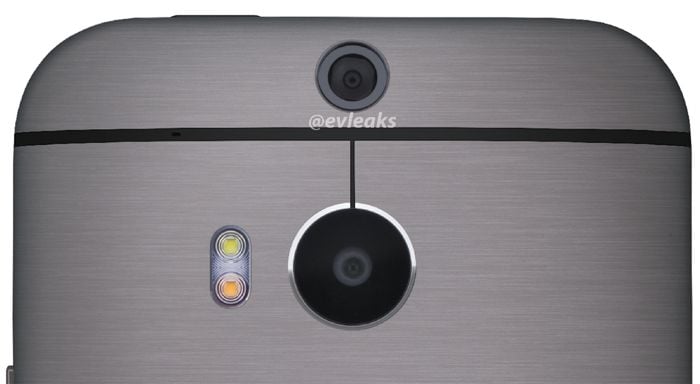 The cameras on the back of the HTC One are said to be dual 5 megapixel cameras, exactly how these two cameras will work together remains to be seen, there is also a dual flash next to the larger camera.

The all new HTC One is said to come with a 5 inch full high definition display that has a resolution of 1920 x 1080 pixels, and the device will be powered by a quad core 2.5GHz Snapdragon 801 processor.

Other specifications on the new HTC One include 2GB of RAM and a choice of either 32GB or 64GB of built in storage, the handset is not expected to feature a microSD card slot.

The all new HTC One will be the first HTC smartphone to come with a new version of HTC’s custom user interface, HTC Sense 6.0, and it will also feature the latest version of Android, Android 4.4 KitKat.

The updated HTC One will be made official at a HTC press conference later this month, as soon as we get some more details on the device, including confirmation of the specifications and some more photos, we will let you guys know.