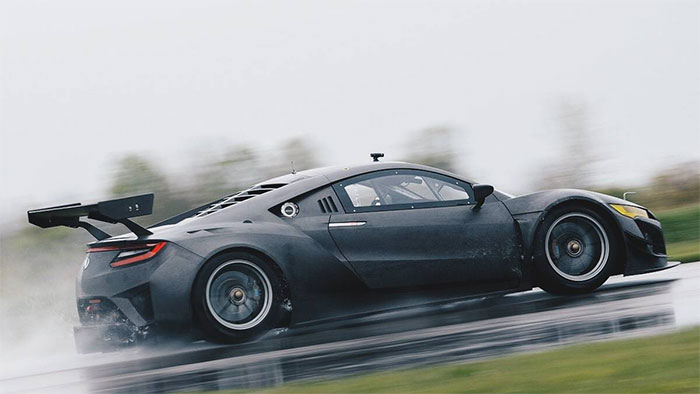 Your first chance to see Acura’s new racecar, the NSX GT3 will come this weekend at mid-Ohio. The car will be testing at the track during a race weekend, which means it won’t be participating in the race itself, but will be participating in all the practice sessions for the race. The testing will give Acura a chance to see how the car will stack up against the Pirelli World Challenge GT, GTA, and GT Cup cars.

The practice sessions are being held Thursday morning and Friday afternoon at the track. This will be the first time the racer has gone up against the McLaren 650S, Porsche 911 GT3 R, Cadillac ATS-V.R GT3, Nissan GT-R, Audi R8, Bentley Continental GT3, and the Acura TLX-GT. The driver is Peter Kox and this car lacks the hybrid power that the production car will have.

“Based on a very successful test program, we’re taking the next logical step in seeing how we stack up against the competition,” said Art St. Cyr, president of Honda Performance Development. “Mid-Ohio seemed like the perfect opportunity, given the demands it places on a race car and its proximity to NSX R&D and manufacturing.”