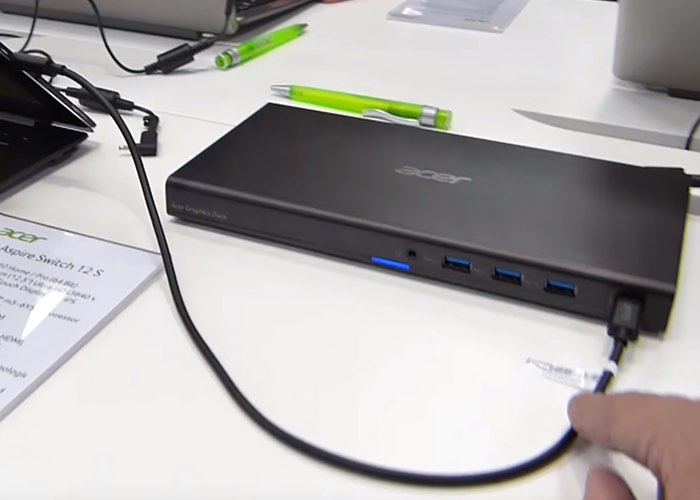 Acer first announced the development of the Acer Graphics Dock during this years CES 2016 technology show back in January, but unfortunately didn’t provide many details or specifications.

However now a few months later at the CeBIT 2016 show in Germany Acer has revealed more details about the graphic dock that connects to systems using the new USB-C connection.

Inside the Acer Graphics Dock is a NVIDIA GeForce GTX 940M graphics card, and the system has been designed to support the Acer Switch 12 S hybrid laptop/tablet. Which was also unveiled at this year’s CES 2016 show back in January and is powered by an Intel Core M5 Skylake processor and sports a resolution of 3840 x 2160 pixels.

The Switch 12 S is fitted with a USB Type-C/Thunderbolt 3 connection that can be used for both data and power and also connecting the new Acer Graphics Dock. Although the Acer Graphics Dock is not providing huge amounts of graphical processing power it will provide a useful boost to the tablet and can be seen in action in the video below.

Unfortunately no information on official pricing or worldwide availability has been released as yet by Acer but the Acer Graphics Dock is expected to retail for around €300. As soon as more information comes to light we will keep you updated as always.