If you enjoy building projects using the awesome Raspberry Pi mini PC you might be interested in this new creation in the form of a 40-Node Raspberry Pi cluster complete with custom-made case.

The 40-Node Raspberry Pi cluster Has been created by David Guill an electrical engineer who recently constructed 40-node computing cluster based on the Raspberry Pi single board computer. Check out the videos after the jump to learn more about his creation. 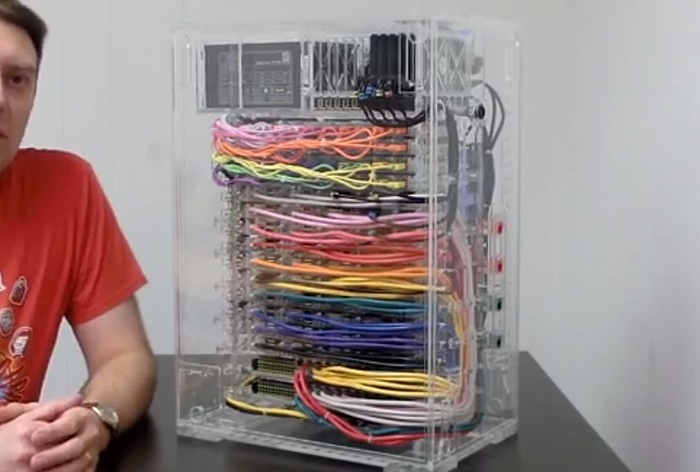 “In the practical sense, this is a supercomputer which has been scaled down to the point where the entire system is about as fast as a nice desktop system. Most of the resources available to individual nodes have been proportionally scaled. I believe this will make it an ideal testbed for distributed software.”

My goals for this project were as follows:
–  Build a model supercomputer, which structurally mimics a modern supercomputer.
–  All hardware required for the cluster to operate is housed in a case no larger than a full tower.
–  Parts that are likely to fail should be easy to replace.
– It should be space-efficient, energy-efficient, economically-efficient, and well-constructed.
Ideally, it should be visually pleasing.

For more information on the new 40-Node Raspberry Pi cluster jump over to the David Guill website for details. Read out essential guide if you are interested in Raspberry Pi displays and HATS.