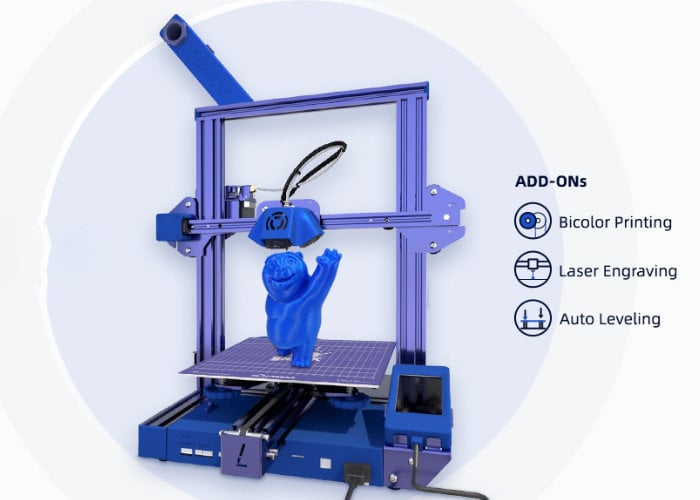 A new 3D printer has launched via Kickstarter this month and already raised over $150,000 thanks to over 500 backers still 22 days remaining. With prices starting in just $199 the desktop 3D printer can also be used for laser engraving and includes a dual printing system allowing you to print with two different printing filaments at the same time.

” The LOTMAXX SC-10 SHARK is our latest and first-ever crowdfunded desktop 3D printer and we chose to launch on Kickstarter for a reason. Kickstarter is always the base of unlimited creativity. Helping to bring the creative projects to life, Kickstarter would be the proven bridge between LOTMAXX and the 3D printing community by bringing us together.

We believe that 3D printing has unlimited potential, and we’re only just at the beginning of this emerging industry. 3D printing technology is penetrating widely and deeply across industrial, makers and consumer sectors. It’s by launching on Kickstarter and connecting LOTMAXX with backers, getting feedback and conducting discussion that we can make further progress on development of 3D printing.”

“Establishing ourselves in 2018, LOTMAXX is a cutting-edge technology company specializing in 3D printing. Gathered with more than 100 professionals, experienced developers and engineers from 3D printing, tablet computer and machine manufacturing industries, we’ve harnessed the great capability of design, research and production of 3D printing.

We want to vitalize the industry with our innovation. By breaking further ground in 3D printing technology, we managed to bring LOTMAXX SC-10 SHARK to Kickstarter. It’s printing faster, it’s more than the average desktop 3D printer.”