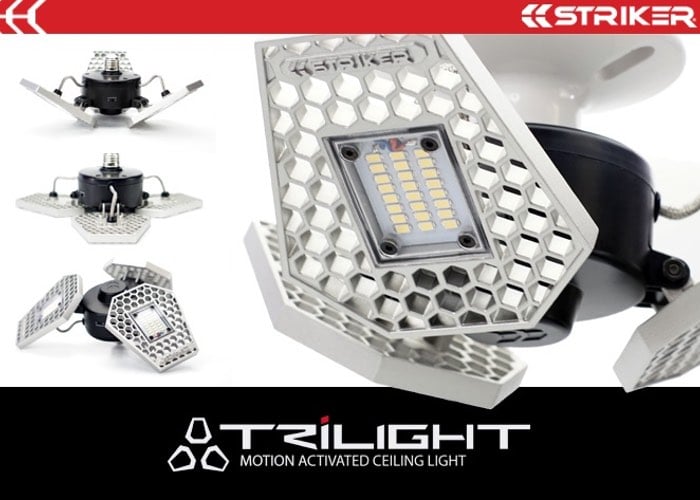 If you have a dark workshop or garage which could do with a little illumination you might be interested in a new motion activated ceiling light called the TRiLIGHT which provides 3000 lumens and is as easy to install as changing a lightbulb.

Watch the video below to learn more about this hugely powerful LED lighting system that only consumes 25W of energy. The TRiLIGH is now available to back via Kickstarter with pledges starting from $85 for early bird backers.

After designing a few really cool flashlights, we have been a bit engrossed in LED’s. They have evolved an immense amount in recent years. LED’s pack a huge punch of power in an environmentally efficient package, and they are more efficient than traditional incandescent light bulbs. LED’s are safer than CFL’s (no mercury and fear of breakage), they burn cooler than halogens, and they are much smaller than florescent lights. What is not to like about LEDs? We agree…nothing! We nerd out on LED’s all the time. In fact, that is how the TRiLIGHT idea was conceived.

few of us were in a poorly lit garage checking out a buddy’s motorcycle that he was working on. We were all shocked that he could get anything done in his dungeon of a garage. This garage only had one, lonely, 60 watt light bulb mounted to the ceiling. That poor, overworked bulb was tasked with the job of lighting an entire 2 car garage. We discussed the options to improve the lighting in the room, but none made much sense in regards to effort vs expense. The most common solution would be to hire an electrician to wire in a few 8 foot florescent lights. After labor, time, parts, and scheduling the time off of work to be home when the electrician can do the work, it wasn’t a good solution for any homeowner.

The TRiLIGHT is as easy as screwing in a light bulb! Just ditch that 60w bulb (Reuse it in a cozy spot in your home where you want some low, warm, mood lighting…ooh la la), and screw in the TRiLIGHT. This innovative light will flood your garage with 3000 lumens of light, but will only use 25 watts of power. For those of you running comparisons in your head, let us help you. A traditional bulb only puts out 800 lumens of light and burns 65 watts, and for those “mathletes” out there, here are the numbers. The TRiLIGHT is 3.8 times brighter and 2.6 times more efficient. By my calculations, that means you can now adequately illuminate your room, save money on your power bill, and be an environmental hero!