Yahoo has gone out of its way to install 20 touch screens across SF. What for? Gaming. Against other people in other bus stops. See that guy in the picture? He’s playing against an anonymous foe from around the corner. Bus stops. Games. Digital combat. We’re sold. 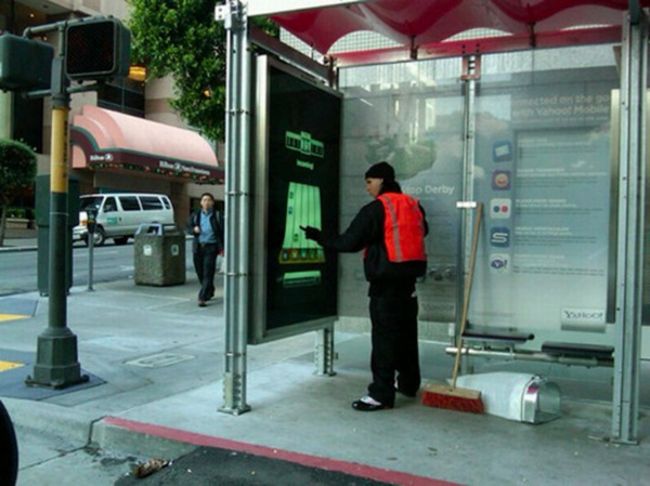 The Yahoo initiative is actually for alleviating the dreadful waits at bus stops. So instead of just staring at pavement, why not play games? But don’t forget about your bus, though. That defeats the purpose of being in a bus stop. Duh!

Don’t expect Call of Duty or Duke Nukem Forever (drools!) to suddenly be available at your corner bus stop in SF. Trivia and wholesome puzzles are the norm for the touch screen applications. The ultimate goal is for winners to rake in 100 points for their neighborhood. When that happens by January 28, a block party is set up with OK Go in the winning neighborhood.

One last thing: this isn’t a %100 Yahoo project. It’s a three way operation between the Municipal Transportation Agency, Clear Channel, and Yahoo to boost advertising. The thinking goes that if more people are at the bus stops waiting and gaming, then advertisers will have better reason to place their ads in a bus stop. Clever, clever, huh?