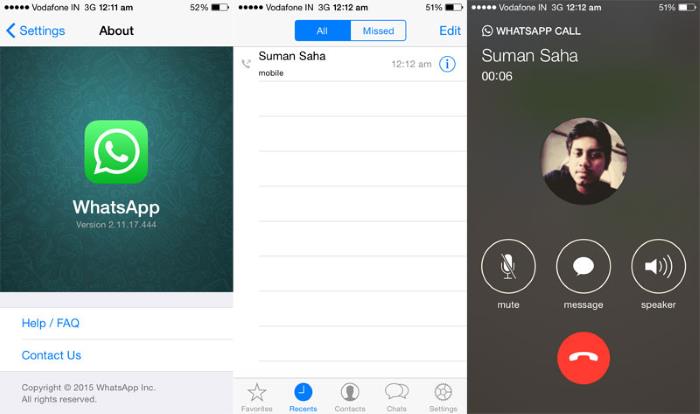 WhatsApp is reportedly working on the voice calling feature for Android and iOS. We’ve already seen some leaked screenshots of how the feature works on Android.

Recently, some images of the WhatsApp voice calling features for iOS made their way on to the internet showing a glimpse of how the feature works.

The feature is apparently available to beta users of the app with version number 2.11.17.444. If you try to call someone without the version, it will also show you a notification that recipient’s version of the app doesn’t support the voice calling feature yet.

There are minor UI changes as well, showing users the “Call” button alongside the usual Edit and Info buttons. Tapping on the call button in the chat will bring the default iPhone calling screen with “WhatsApp call” on top of it.

Since the feature has made its way to the beta version of the app for iPhone, there’s a possibility we may get to see it land officially for the app in the near future. Nothing is confirmed so don’t get your hopes too high, we’ll update you as soon as its available.