If anything touched by classic Star Wars is your weakness, you’ll want to buy these so bad it almost hurts. 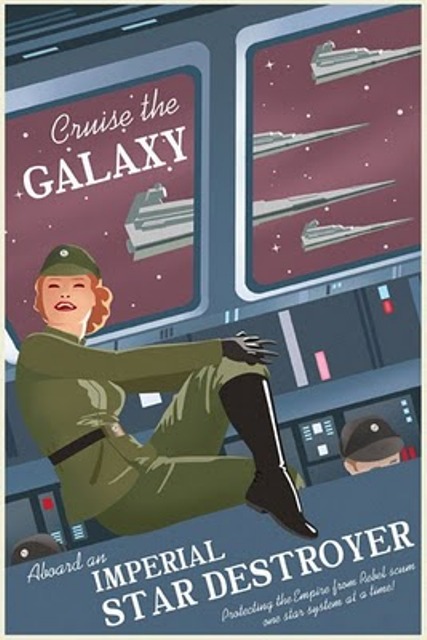 The picture you see above is among eight travel-themed promo posters of yore (say, the 20s and 30s) that have a Star Wars spin. Created by artist Steve Thomas for release and printing via a certain unnamed website that’s been delayed for two years. Thomas has finally decided to put them up them on his blog since  there’s a book of Star Wars fan art due son and he doesn’t want his labors to go unnoticed, selfishly hidden from the public eye.

Anyway, here’s what Thomas has to say about the eye-catching prints:

“I decided I couldn’t wait any longer to show them. With the release of the art book Star Wars: Visions, and everyone else sharing their awesome Star Wars inspired art, I wanted to throw mine into the web mix.”

There are a total of eight colorful illustrations that entice the viewer to visit a galaxy far, far away. Thomas has prepared a gallery of sorts in this location.

If we had the dough or the pull to score a couple of these, we’d go for the one with a chick advertising Star Destroyers and the Rogue Squadron Airshow.