It appears as this was a hectic week for T-Mobile. Few days back, the company announced that they will introduce two much awaited phones on their network, Sony Xperia Z and Lumia 925. The company had a bad experience when they released the Jelly Bean update earlier as it caused battery issues for many users. The company is now rolling out the much awaited Android 4.1.2 Jelly Bean update (baseband version P76920f) for its LG Optimus L9 users. 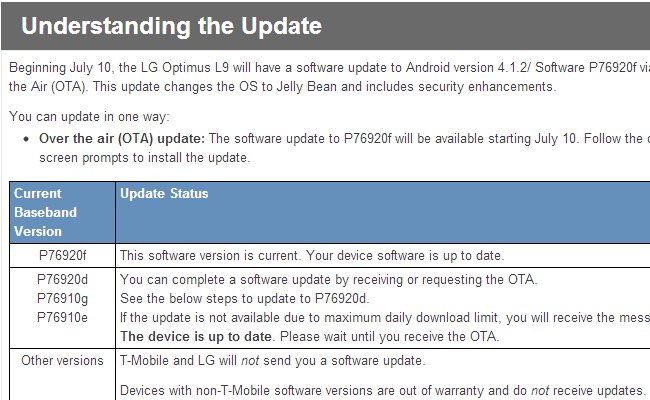 Sized at 355mb, the update brings many improvements, bug fixed and security enhancements, although we have no clue what security enhancements will it bring. The update is being push over-the-air(OTA) beginning  10th July, so there is a chance that most of you will get the notification in the coming few days. If you don’t, you can always manually check for the update.

If you are one of those T-Mobile Optimus L9 users who received the update, share with us your experience. Do you notice any improvements or performance changes after upgrading to the latest version? Feel free to comment.