Leftover pizza are the orphans of great parties. What to do with the poor fellas the morning after? Eat them, of course, except that pristine yumminess might be gone after the stiff slices have been microwaved back to warmth. To curb energy use and be eco-efficient, a bunch of high schoolers built several crude solar heaters specifically modeled to hold pizza. Ah, the Youth. If this is the face of modern innovation, a bright future lies ahead. 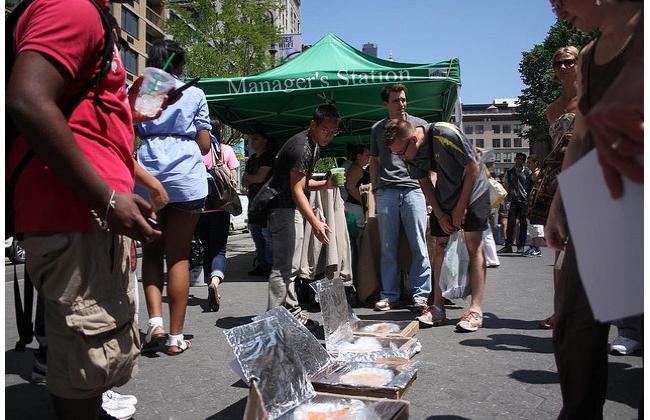 Yesterday students from two New York high schools showcased their DIY builds at the Union Square Greenmarket. As more than implied by its title, the Greenmarket sought to exhibit innovation along eco-conscious lines. New York is a hotbed for radical ideas in this sphere, pioneering urban farming on high rise rooftops and rolling out benefits for high tech companies who want to leave a less destructive imprint on the emissions scale.

The students who made the solar heated pizza boxes executed a project in the same spirit  but on a different medium. The heated boxes are no joke when it comes to output either; one of them is capable of 200 degrees, effectively guaranteeing molten mozzarella mastery. Though the science of heated pizza has long been perfected, DIY projects like this should always be lurking in the tasteful thoughts of the food-inclined.