People in the San Francisco area started freaking out when official-looking signs depicting a drone firing a missile stating “speed enforced by drones” started cropping up all over Bay Area highways. However, a local news station, and many more since, has reported that these signs are indeed fake and being removed by the California Highway Patrol, also known as the CHP.

The CHP confirmed that the signs were professionally made with the same materials official road signs are made out of. One even went so far as to use tamper-resistant bolts! Authorities still don’t know who’s behind the prank. 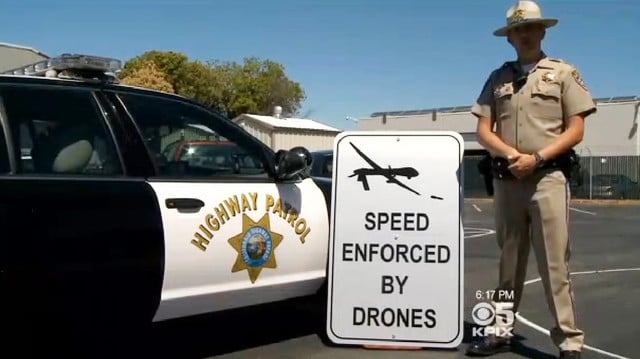 It’s a costly prank to say the least, but a damn funny one too. While drones are indeed capable of such tasks, I think the US government is still far from implementing speed enforcement drones. Even if they did, they certainly wouldn’t show signs of drones firing missiles on the sign.

Regardless, the cost of such implementation is still entirely too high. Drone technology is too expensive for any local law enforcement agency to use at the moment, especially for such tasks. Although the second it is affordable you’ll start seeing similar signs all over the place.

Do you agree with the idea of using drones to enforce speed limits, or should a cop still be required to pull you over? For the record, I believe the latter.