In less than a month, Las Vegas will host one of the biggest consumer electronics show, CES 2014. The event will start on 7th January and will go until January 10th. Recently, Sony announced its main press event will take place on January 6th 2013 and will begin at 5PM local time at LVCC, Central Hall. 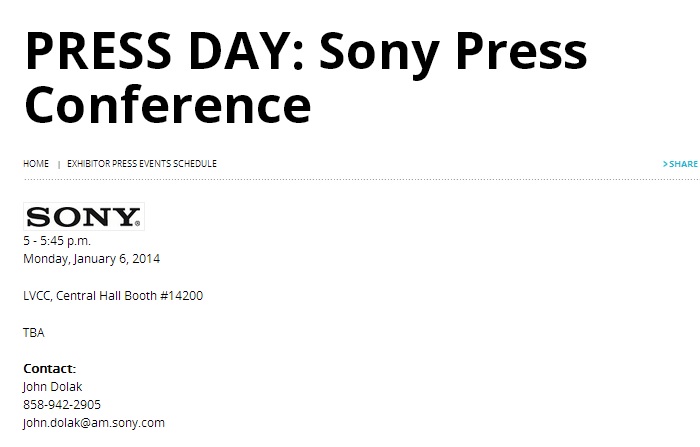 We’re expecting that Sony will unveiled several new products at the event including the much-anticipated Sony Xperia Z1s aka Xperia Z1 Mini. The reason why there’s so much hype about the handset as it’s expected to come with a same set of features as its big brother, including a quad-core Snapdragon 800 Chipset with Adreno 330 GPU, 2GB of RAM, 16GB storage with a microSD card slot, Bluetooth, WiFi, and is expected to come with Android 4.3 pre-installed out of the box. The only major difference is rumored to be the screen, the handset will come with 4.3 inch display sporting a resolution of 1280 x 720 pixels.

There’s a chance that Sony will live stream the event as they did for their previous event at IFA 2013 in Berlin. So, if you’re in any other time zone, you can check the respective time from here. Share your thoughts on what you think will be showcased by Sony at the event in Las Vegas