It should be since its only reason to exist is for carrying luggage and stuff around the house or wherever it’s employed. 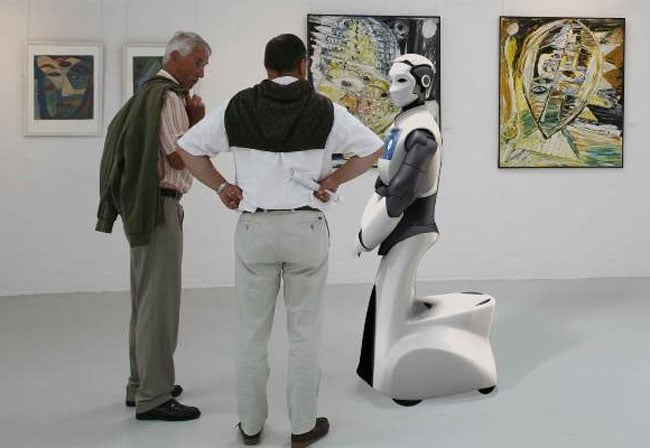 The Reem-H2 from Spanish company PAL Robotics is ideally suited for ‘public environments’ where it caters to human satisfaction ala Bicentennial Man. Despite the sinister glint in its lifeless bionic eyes and muscular frame that awfully contrasts such feminine touches as a dress-like lower half and the mound of its non-breasts (quick, someone hire Luigi Colani to redesign REEM-H2), the robot is a leap when it comes to human relations.

Capable of facial recognition, REEM-H2 also sports an interactive display on its chest where users can communicate and access vital info—like where the john’s at in a bustling foreign airport crowded with people. On top of such wonderful features, REEM-H2 is being touted by the official promo press as capable of entertaining us humans. Specifically what kind of entertainment isn’t mentioned, though its Spanish origins may suggest an affinity for Flamenco.

This is supposed to be sold at some future date but we don’t know when or how much. Stay tuned then.