Bandages are way over rated. Okay, apologies to anyone in the medical profession or bandage fans reading this, but it’s always better to clean a wound first and foremost than to instantly stick a bandage on it. Also, bandages suck when the adhesive wears out. They’re puny too, sometimes incapable of keeping gashes or sizable cuts free from dirt.

These shortcomings don’t say that bandages aren’t fun. In fact, here is a newfangled spin on the age old scratch plaster that you can call, ‘What Happened?’ 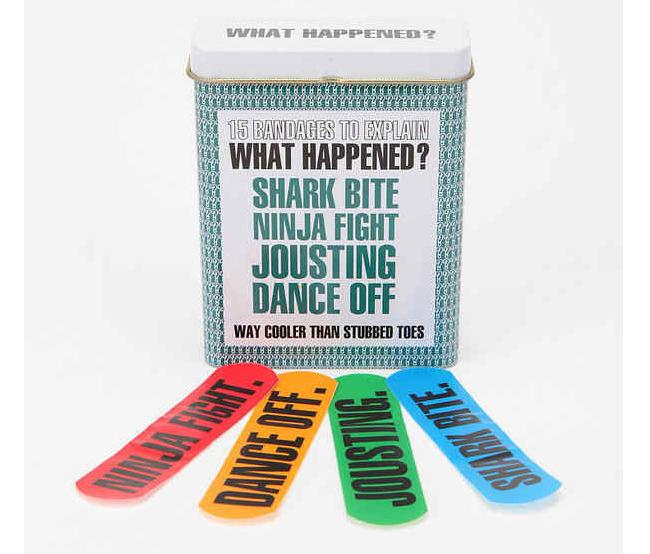 So this bandage maker has just outed a new line of bandages dubbed ‘What Happened?’ The long version is that there are 15 bandages  included to explain What Happened? Everything is contained in a metallic box with more than a dozen strips printed with less-than-lame excuses for minor injuries.
The pimple on your forehead? Dance off, bro. People get hurt in a dance off? Only in the movies, actually. Also included is our favorite, shark bite. (See pic above.)
Would have been cooler if there was zombie infection as well. Real tongue and cheek with a side order of camp.
The best part isn’t really found on the bandages themselves though. Nope, the best part is a box of these only costs $7.
Source Urban Outfitters