It’s actually an odd sculpture that can pop open a beer bottle in no time. 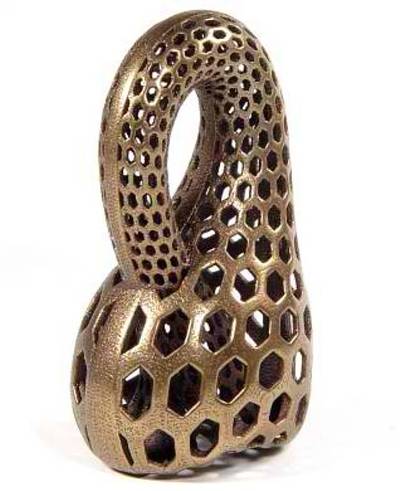 Created y some esoteric chick/artisan over at Bathsheba Sculpture, this stainless steel headscratcher (as in you’ll initially scratch your head thinking what it’s for) is supposed to aid people during their periods of alcoholic revelry. Below is a mouthful of pseudo-scientific doctrine explaining the why behind the bottle opener’s existence:

“The problem of beer  That it is within a ‘bottle’, i.e. a boundaryless compact 2-manifold homeomorphic to the sphere.  Since beer bottles are not (usually) pathological or “wild” spheres, but smooth manifolds, they separate 3-space into two non-communicating regions: inside, containing beer, and outside, containing you.  This state must not remain.

A proposed solution  Clearly the elegant course is to introduce a non-orientable manifold, which has one side and does not divide 3-space.  When juxtaposed with the beer-bounding manifold described above, it acts to disrupt the continuity thereof, canceling the outdated paradigm of distinction between interior and exterior.  This enables the desired interaction between beer and self.

Implementation The Klein Bottle Opener1 shown above is an example.  It is palm-sized, durably constructed in stainless steel, effective1, and blissfully ergonomic.

[1]  This sculpture is factory-finished with a heat-treated patina.  It’s glossier and more golden than the hand-finished version, and is unsigned.

[2]  Yes, it really works!”
Nutty, right? I you’re totally sold on the hype, one of these doodie shaped contraptions wills set you back $78. Go here for extra info.