Look! It’s shaped like a keyboard ‘command’ button. Woah. Since 3D printing has already emerged as hobbyists sugary dream come to vivid life, expect no end to custom jobs similar to what’s pictured below. It’s actually part of an entire line of rings, none of which rule each other. 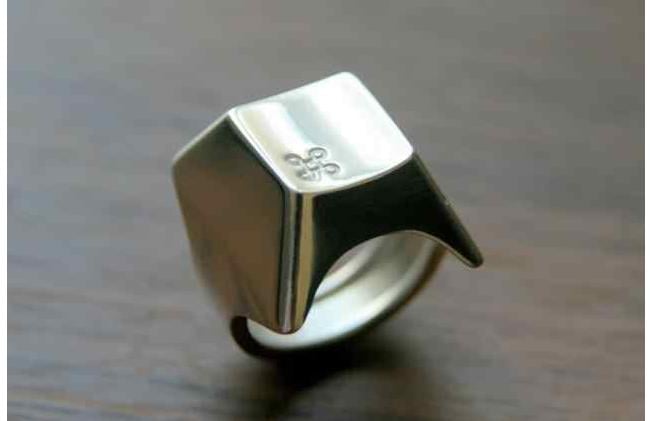 The commanding awsomeness of this Command Ring is in proud display at this online retailer called Shapeways. The people behind its creation, however, falls under the flag of Form Laboratories whom we believe mess with 3D printing a lot.

As mentioned, there’s a whole line of game themed and mecha-industrial rings available at Shapeways usually selling at a little over $50. The trick is the kind of plating customers want on the ring. For the Command key variant pictured north is available in stainless steel, glossy finish, and gold plate. Of course, the more ornate the material, the higher the price. The Command Ring is at its priciest in matted silver, selling for $101.

Here’s an enticing video for your visual senses:

It would be cool if the Command Ring could be modded to either glow or shoot a (harmless) laser beam. That way you can pretend to be the ruler of a post-apocalyptic barbarian sci-fi kingdom in your backyard. All you additionally need is a large sword, a laser pistol, and a loin cloth. Don’t forget a suitable throne. A plastic foldable chair will do in the meantime.