Yahoo continues its acquisition spree. One of the latest acquisitions has been Astrid, a task management application that was closed down after it was acquired by Yahoo last month. The most recent company to face the closure after getting acquired by the giant corporation is Rockmelt – an internet discovery service. 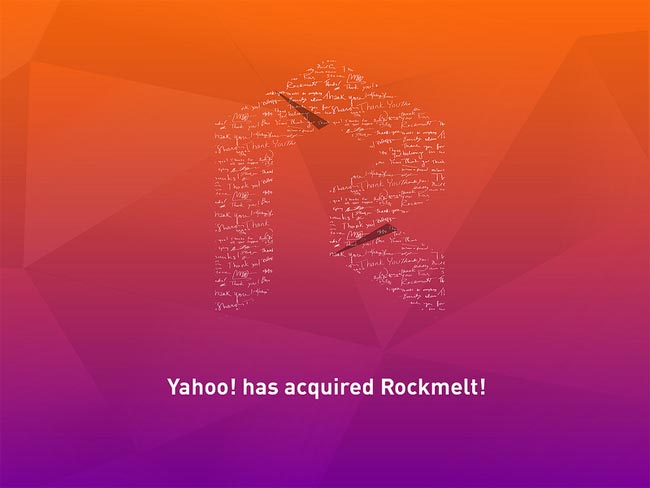 The service released its Android application few weeks back that has been taken down after the acquisition. The service will shut down on 31 August so all the Rockmelt users are expected to export their entire data. The company did not disclose the acquisition price but the folks at AllthingsD report that it is somewhere between $60M to $70M.

Yahoo! and Rockmelt share a common goal: To help people discover the best content from around the web. In our short four and a half years at Rockmelt, we’ve learned a lot about how you like to browse the web, discover content, and share the great stuff you’ve found. You’ve been right by our sides as we’ve celebrated successes, endured failures, and invented new ways of doing things.  You’ve taught us a ton. And we plan to put everything we’ve learned to work at Yahoo!

For many of you, Rockmelt has become a daily habit and for that we’re eternally grateful… so we’ve kept all your valuables safe. In each of our products, you’ll find a tile to click on that initiates the export service. Your kept items will be exported as bookmarks and the feeds you follow as an OPML file. The Rockmelt apps and web product will be shutdown on August 31, 2013.

There is no word about what the company will do with the service, but I think it might end up in Yahoo’s acquisition garage just like Astrid or Xobni and all the other services that were acquired by Yahoo. The only service that didn’t face the similar fate was Tumblr which was also taken over by Yahoo.